Beverage Brand Sponsorship of the EFL Cup: A Short History 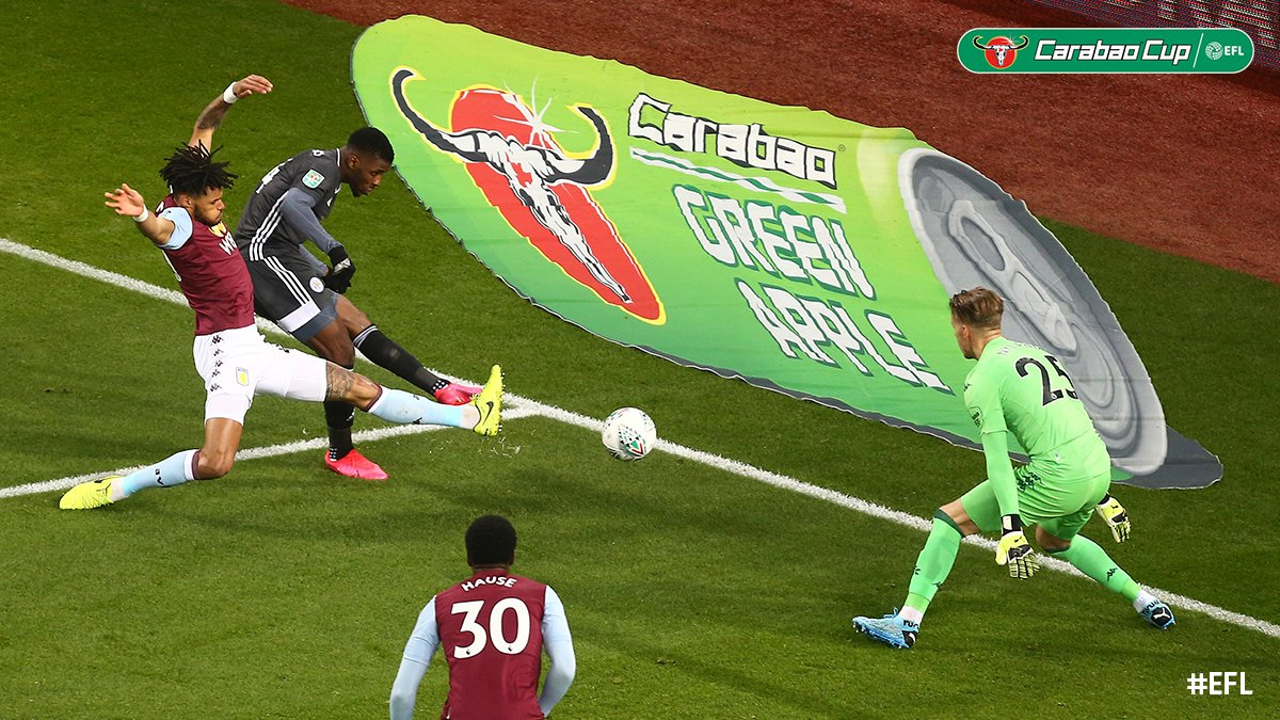 Posted at 12:13h in News by Michael Viggars

In November 2016, the EFL and Carabao formerly announced a three-year partnership deal that would see the Thai energy drinks manufacturer become the fifth beverage brand to sponsor the EFL Cup. Ahead of the Carabao Cup Final this Sunday, we review these partnerships and the implications for public health.

It is completely ordinary for sporting events, tournaments, stadia and teams to be sponsored by or enter into partnership agreements with commercial brands. These companies provide cash to sports organisations in exchange for the opportunity to exploit the commercial potential of the association between themselves and sport; in this case football.

Football is widely considered to be a ‘healthy’ activity and by associating a product with football, or indeed any sport, companies can create a ‘health halo’ effect around its products and beverage brands are no exception. Typically, a health halo effect is generated when the public either underestimates the harms of a product or overestimates its benefits.

Tobacco companies used this dynamic to great effect and whilst tobacco sponsorship of sport is now illegal and indeed unthinkable in the UK, there are many other brands including non-alcoholic and alcoholic beverage manufacturers that continue to sponsor sport, despite their negative impact on public health outcomes.

The UK’s sports strategy mentions that “a number of sports, and individual clubs, have adopted a responsible approach, for example around sponsorship by companies marketing alcohol or high fat sugar and salt (HFSS) foods.” Yet, since its publication, there has been a proliferation of partnerships between sports organisations and HFSS food and drink brands, particularly sugary drinks.

Voluntary agreements are ineffective. That’s why we wrote to the Minister for Sport and Secretary of State for Health and Social Care alongside the Football Supporters’ Federation calling for the UK Government to establish mandatory restrictions on marketing of HFSS products through the ‘National Game’.

When it comes to sponsorship, the EFL Cup has a somewhat mixed history. A total of eight brands have partnered with EFL to sponsor their signature cup competition since the 1981/82 season, five of which have been a beverage brand.

Over-consumption of high-sugar drinks products have been linked to a number of acute oral health issues and long-term diseases such as overweight, obesity, cardiovascular disease, type 2 diabetes and various forms of cancer. This has led to the introduction of fiscal measures in the UK, such as the tax on sugary drinks and increasingly, calls to restrict how unhealthy products are advertised, particularly to children and young people. 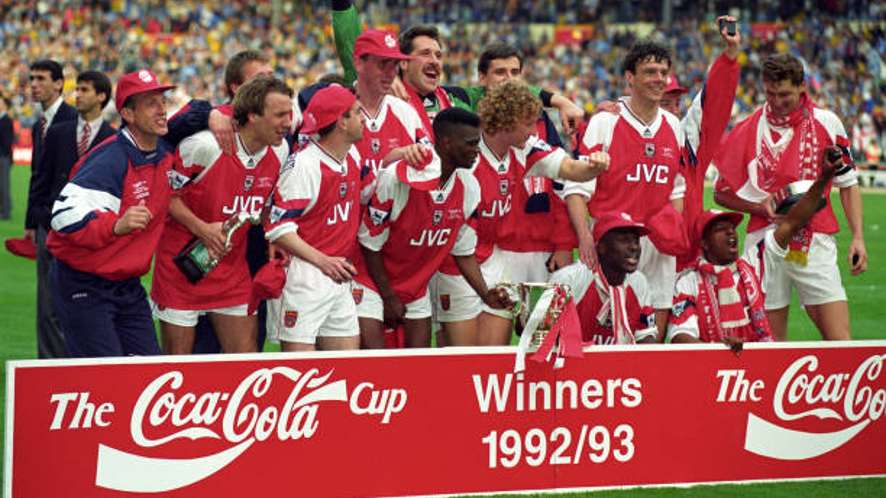 Arsenal won the Coca-Cola Cup in 1993

American soft drinks giant Coca-Cola, a prolific sponsor of amateur and professional football, agreed a £5 million deal to take over the sponsorship of the then Football League Cup from Rumbelows for two years, a deal they then extended for a further three years.

At the time, the EFL president, Gordon McKeag, expressed his delight that the league had pulled off a deal with the world’s most recognisable beverage brand, at a time when the Premier League was struggling to find a sponsor. He said: “Coca-Cola approached us and we recognised the chance of a long-term dynamic association.”

One can of Coca-Cola contains 35g of sugar or approximately 9 teaspoons – more ‘free sugar’ than the NHS recommends adults should have in one day and almost double what a 5 year-old should have. 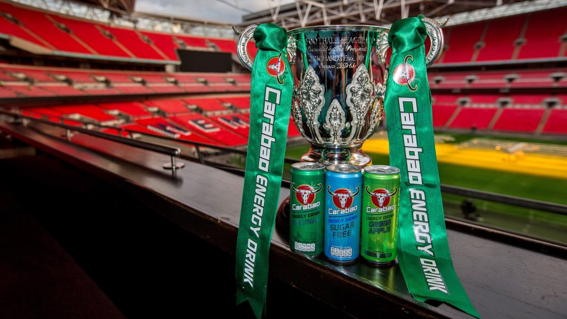 Carabao have sponsored the EFL Cup since 2017

Carabao’s current title sponsorship with EFL is one of several high-profile partnerships between sports organisations and high-sugar drinks brands. The Thai energy drinks manufacturer is also the shirt sponsor of EFL Championship club Reading and one of Chelsea’s principal partners, with the logo appearing on their training attire and on billboards during Chelsea’s recent FA Cup loss to Manchester United.

Carabao products not only contain a lot of sugar, they also contain large volumes of caffeine. Over-consumption of caffeine has been linked to a whole host of negative physical, mental and behavioural effects and are particularly attractive to children and young people. One 330ml serving of Carabao Energy Drink Original contains 105mg of caffeine – about the same as a regular cup of black coffee.

Pairoj Piempongsant, Chairman of InterCarabao (which even sounds like a football team), stated: “The EFL Carabao partnership represents a unique platform to expand the Carabao brand nationally and globally; and thus leveraging the universal “fighting spirit” of football with a truly powerful global platform that will bring new awareness to the EFL internationally, while also establishing Carabao as a major player in the global Energy Drinks market.”

There is a substantial body of evidence linking alcohol advertising through broadcast and non-broadcast media to underage drinking and excessive drinking amongst those of a legal drinking age. Marketing self-regulation has failed to keep alcohol advertising from reaching large numbers of underage persons and affecting their drinking patterns and as with non-alcoholic beverage brands require additional attention in order to curb their influence.

Beer firm Worthington struck a £23 million deal the EFL to begin sponsoring the signature cup competition in 1998. Perhaps the most forgettable beverage brand to sponsor the EFL Cup, the Worthington Cup was widely derided as the ‘Worthless Cup’ following a period in which Premier League teams fielded weakened sides in response to an increasingly demanding domestic season and involvement in European competition.

Molson Coors, who own the Carling brand, forked out £5million-per-season to have their name on the EFL Cup for a total of nine seasons – the longest stint of any EFL cup sponsor to date. Despite their formal partnership ending seven seasons ago, many football fans still affectionately refer to the EFL Cup as the Carling Cup. This could be due to several factors including the negative perceptions of the competitions previous sponsor Worthington’s, the length of the association but perhaps also how easily ‘Carling Cup’ seems to roll off the tongue.

Neither Sweet nor Unsavoury 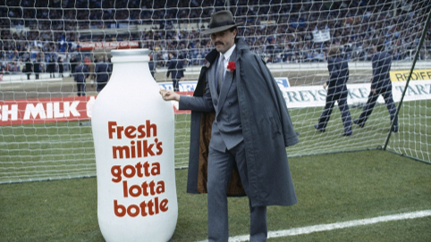 Having been sponsor-free for 22 years since its inception in the 1960/61 season, the EFL Cup took the bold step at the start of the 1981/82 agreeing a sponsorship with the Milk Marketing Board. The Milk Cup was born.

The deal was worth £250,000, about five weeks’ wages for the average Premier League player in 2018. This was the first time an English football competition had taken the name of a brand.

Owing to the commercial growth of football, such partnerships are now incredibly rare. Indeed, only one Premier League club has a formal relationship with a bottled water brand.

Until regulatory action is taken, alcoholic and sugary drinks brands will continue to exploit sport to advertise their products. It is time the football family put public health before profit.

Unsporting behaviour: How does junk food marketing in sport affect children’s health?
How can sports sponsorship be a force for good?