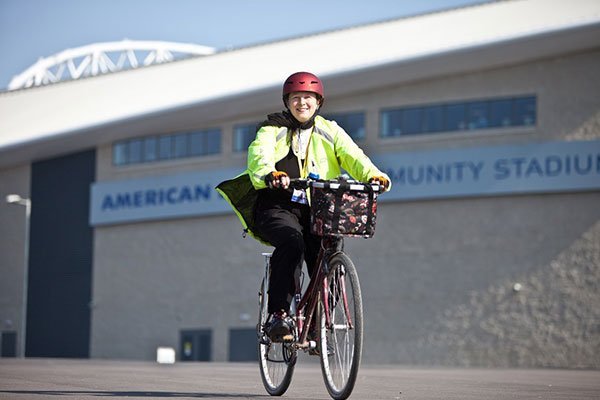 Posted at 16:49h in News by healthystadia

New data made available to Healthy Stadia demonstrates the success of the comprehensive Travel Management Plan in place at the American Express Community Stadium, commonly referred to as the Amex – home of Brighton & Hove Albion F.C.

Data collected over the past five seasons indicates more than half of all home and away supporters include an active component as part of their journey to the American Express Community Stadium on a matchday. In each of the past five seasons, more than half (53%) of matchday attendees have travelled to the stadium using multi-modal travel, i.e. combining walking or cycling with public transport, with in excess of 200 cycle locking racks used at every game.

Since moving to the Amex in 2011, a key goal for the Seagulls has been to limit CO2 emissions by promoting and improving sustainable transport links, specifically public transport, and the number of supporters using the nearby Falmer Station on a matchday is testament to this agenda. This emphasis on public transport has not only safeguarded the air quality in and around the stadium but has indirectly increased physical activity levels as staff and supporters alike now walk to and from the train or bus station when visiting the Amex.

“Many congratulations to Brighton & Hove Albion for their pioneering work encouraging staff and supporters to leave the car at home and to travel by more sustainable means – including walking and cycling.

“Clubs in the UK have a long way to go to emulate some of their contemporaries on the continent, but this case study will add to the growing active travel agenda and present professional sports clubs up and down the country with a brilliant example of what can be achieved with proper planning and investment.”

“We have always shown our commitment as a club to the use of sustainable transport, ever since the stadium opened nearly six years ago.

“This study with Healthy Stadia further demonstrates the tireless work we do to promote the use of public transport to both our supporters and staff.”