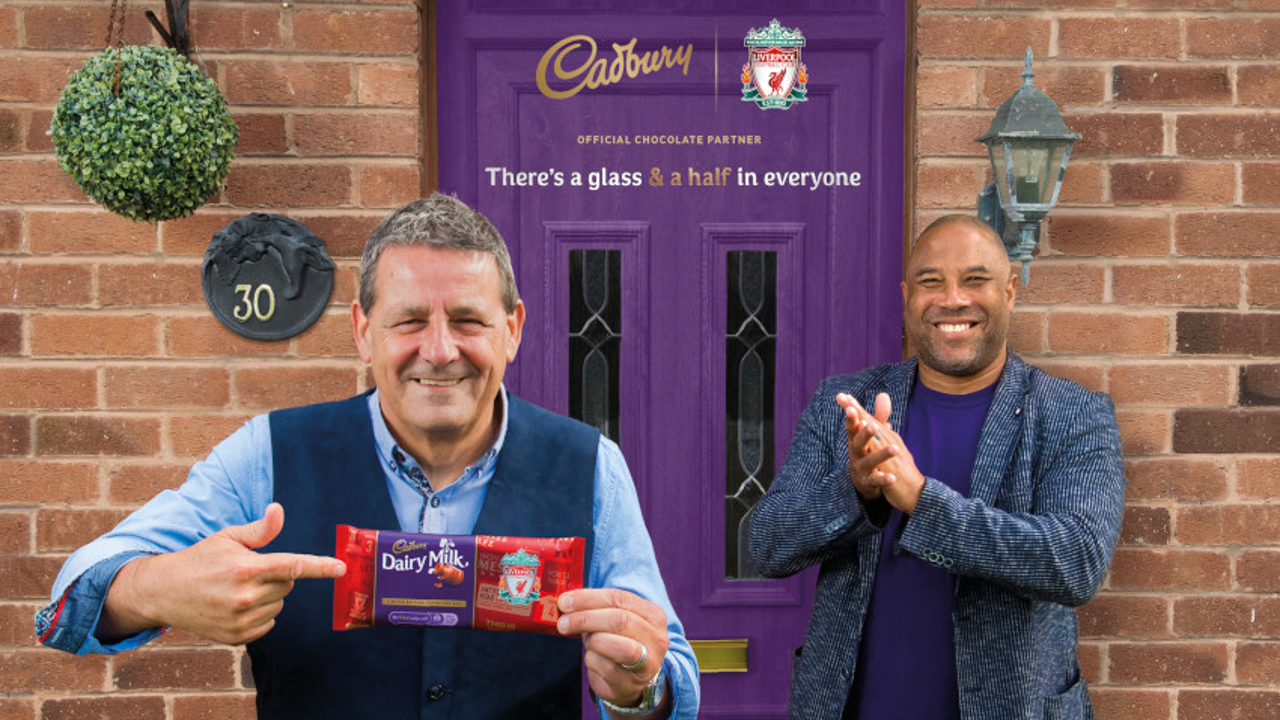 Posted at 15:58h in News by Michael Viggars

In the UK, these new partnerships are framed around Cadbury’s generosity ethos of ‘a glass and a half in everyone’, and will provide business and/or community support and opportunities to celebrate community champions in response to the COVID-19 pandemic.

For instance, Cadbury will support Liverpool’s virtual employability programme which was launched in response to the COVID-19 pandemic and aims to help people across the Liverpool City Region who have been made redundant or who are at risk of losing their job.

Cadbury partnered with Manchester United before the pandemic, but sought to raise awareness of social isolation amongst elderly people, encouraging us all to ‘donate your words’ to help tackle loneliness.

And at Manchester City, Cadbury will help to celebrate individuals and organisations who have gone above and beyond to support local communities as they respond to the impact of COVID-19.

These hyper-local interventions are all part of a sophisticated programme of Corporate Social Responsibility (hereafter CSR) designed to build relationships with local communities and fans and develop trust in their brand. This then helps to divert attention away from the fact they are primarily promoting chocolate bars to fans – and a significant proportion of these will be children and young people.

We know from several evidence reviews that exposure to unhealthy food and drink marketing in children under 12s can influence food preferences, eating habits and ultimately weight status. At a time when a significant proportion of children are living with overweight or obesity, particularly in deprived communities across Liverpool and Manchester that experience greater health inequalities, promoting chocolate is at best, distasteful.

These partnerships are also designed to incentivise the purchasing of Cadbury chocolate for seemingly philanthropic means. Promotions are now encouraging fans to buy limited edition LFC Champions Dairy Milk bars to raise money for LFC Foundation’s virtual employability programme. Just a day after the 95g bar was launched, which retails at £2.50 (£1.50 more than its slightly larger, standard equivalent) and contains 53.2g of sugar, the initial run of 50,000 bars appeared to be sold out on the club’s official website – demonstrating the effectiveness of a bespoke promotion such as this.

Similarly, with each purchase of regular Cadbury products, fans can enter their Match and Win competition to win a selection of prizes including coveted tickets to see one of the Premier League’s ‘Big Six’ in action. This seems a somewhat disingenuous incentive given that there remains no clear plan for the return of spectators at sports stadia due to the COVID-19 pandemic, VIP or otherwise.

Interestingly, but perhaps not unsurprisingly, it is not just fans in the UK and Republic of Ireland that can access Cadbury promotions associated with the Premier League. Already Cadbury’s parent company Mondelēz are running promotions in South Africa using social media influencers posing with Cadbury products whilst watching football. The Big Six are global brands with hundreds of millions of fans around the world and protecting them requires a response on a national and international level.

Emerging evidence suggests those living with chronic health conditions such as heart disease, type 2 diabetes, and indeed obesity, are at greater risk of worse outcomes associated with COVID-19, including risk of hospitalisation, complications, and mortality. Which begs the question – is now the right time to be promoting chocolate? 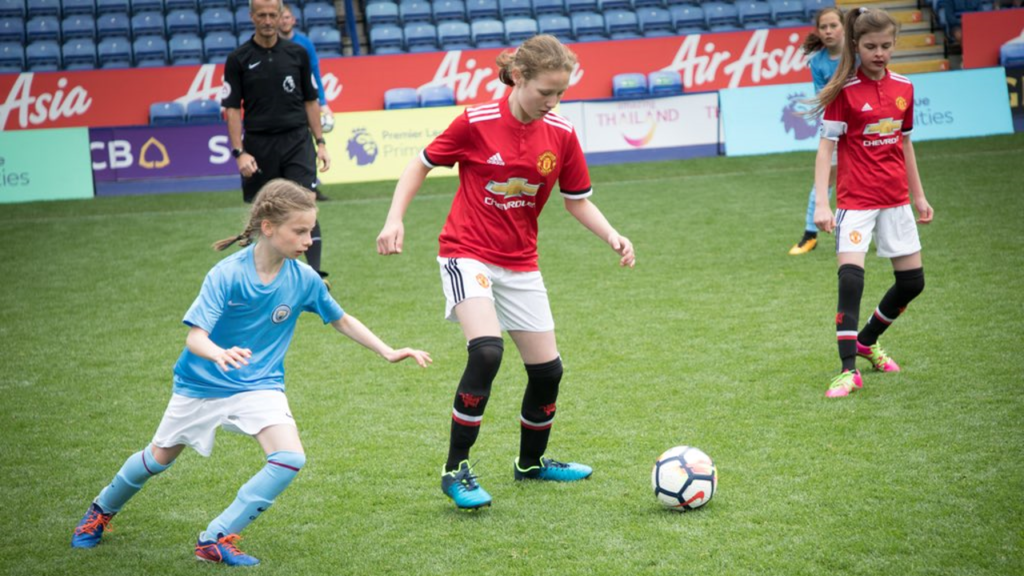 Some of the great work undertaken by club community organisations through the Premier League’s Primary Stars programme is undermined by commercial partnerships with the likes of Cadbury.

In stark contrast, some Premier League players have been using their platform as a force for good. Manchester United and England striker Marcus Rashford brought the issue of free school meal provision during summer holidays into the spotlight in the UK. Following years of campaigning from the Food Foundation and Children’s Food Campaign (amongst many others) Rashford forced the government into a U-turn which meant that 1.3 million children would continue to receive free school meals during the summer break – a huge win that will ensure children in food insecure households don’t go hungry. And Rashford’s not finished yet. He’s now launched a Child Food Poverty Taskforce with support from leading retailers and supermarkets.

Club community organisations attached to professional football clubs, including the Premier League’s ‘Big Six’, have also endeavoured to support vulnerable individuals and communities throughout the pandemic collecting food parcels for food banks and delivering shopping and hot meals to those with underlying health conditions shielding at home.

These same organisations also provide unique opportunities for children and young people to take part in sport and physical activity all year round, pandemic or no pandemic. However, partnerships with parent clubs such as the one with Cadbury fundamentally undermine the health and wellbeing objectives of their own community trusts, making it that bit more difficult to have a significant impact. It seems somewhat perverse that children and young people can be participating in the Premier League funded Primary Stars programme which includes education sessions on healthier and balanced diets, only for children to be sensitised to chocolate brands through Premier League club partnerships.

Across the UK, research shows that what we eat, rather than a lack of exercise has a greater impact on our weight. Acting on diet-related health would provide a greater reduction in population disease and mortality than tackling low physical activity levels and would therefore yield much larger benefits and cost-savings for our underfunded NHS.

If the potential of CSR is to be achieved, Premier League clubs would do well to consult with their own first-team players, academy prospects and the communities they serve to hear first-hand the problems facing ordinary working people. If they did, they’d learn that fresh fruit and frozen vegetables are far more valuable than a glass and half of refined sugar.

Of course, Cadbury are not alone in this type of marketing activity. There are several other brands that are leveraging the international appeal of the Premier League to help promote high fat, sugar and/or salt products using tried and tested techniques initially developed by the tobacco industry but now augmented by the digital sphere.

From Coca-Cola’s sponsorship with the Premier League to Monster Energy partnering with eight Premier League clubs these types of deals are multiplying but are not yet on the radar of national government.

A new national obesity strategy was announced in July that featured a 9pm watershed on the advertising of less healthy food and drink on TV and online, among other measures to address the wider food environment. Whilst we were pleased to see the Government commit to these proposals, both Food Active and Healthy Stadia raised concerns that the new marketing restrictions would not include sports sponsorship. Unless action is taken to address this loophole we are concerned that as restrictions are tightened on TV and online platforms, the food and drink industry will look to sport to capture the minds and mouths of children and the pockets of their parents.

This blog is a joint piece from Food Active and Healthy Stadia (part of the Health Equalities Group) and was written by Beth Bradshaw (Food Active) and Michael Viggars (Healthy Stadia).

Sport relegated to subs bench in fight against obesity
Do footballers need educating on the potential harms of their commercial partnerships?