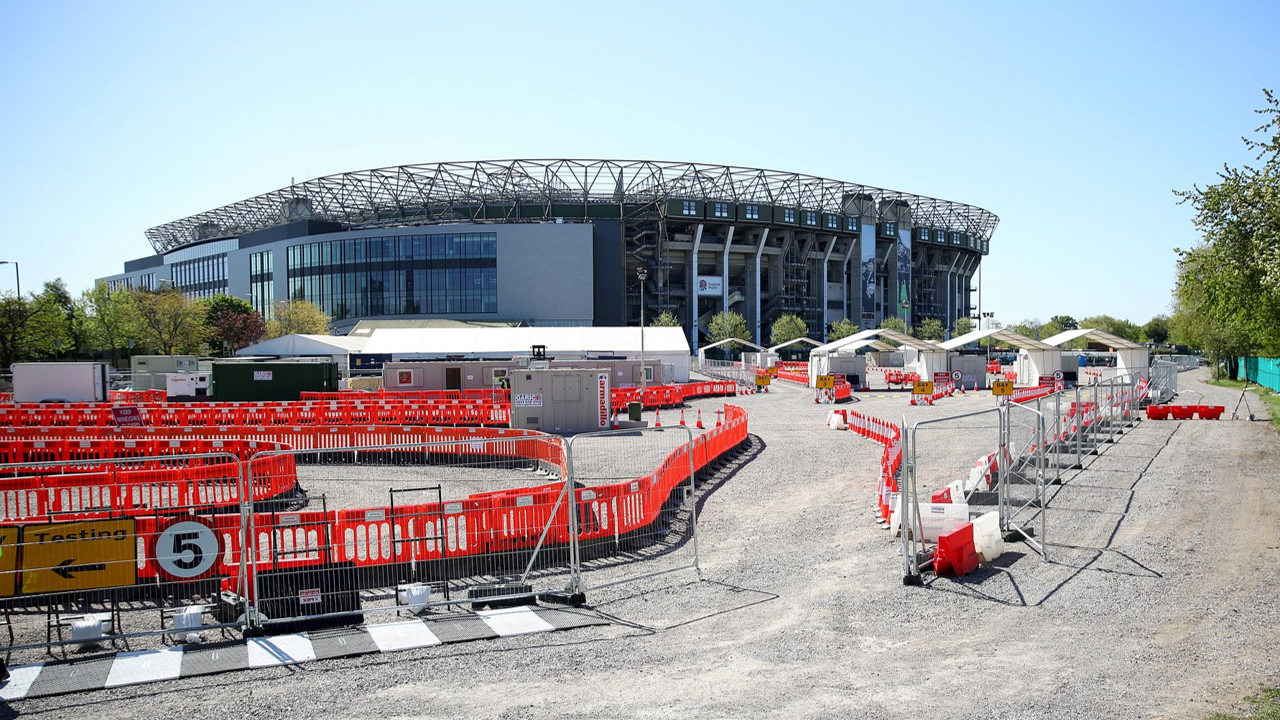 Posted at 15:45h in News by Michael Viggars

Across Europe, sports stadia have demonstrated their versatility in supporting health services, local authorities and municipalities respond to the COVID-19 pandemic. Some have been set up as fields hospitals whilst others are being used for community testing. We review some of the most innovative projects to date.

Following the postponement, and in many cases the cancellation, of sports leagues and cup competitions, stadia across Europe have found themselves eerily quiet waiting for normal service to resume. However, the unique challenge of the COVID-19 pandemic and the risks in terms of transmission of coronavirus between supporters and indeed staff and volunteers, means that stadia will not be able to receive fans for the foreseeable future.

However, given the assets that many stadia and sports organisations possess, many have responded to the COVID-19 pandemic by offering their facilities to health services, local authorities and municipalities to support efforts to contain the virus and treat those suffering from the disease. Some including Real Madrid’s Santiago Bernabéu Stadium have been used as medical storage facilities, but many others have demonstrated true versatility in responding to the ongoing public health crisis.

Many large stadia are situated in densely-populated inner-city areas with good access to road infrastructure. This has led to main local authorities and municipalities identifying sports stadia as suitable locations to set up temporary field hospitals in the event that local health service capacities are overwhelmed by the COVID-19 pandemic.

The Principality Stadium in Cardiff, Wales is one such as example and has been converted into a temporary field hospital to ease the pressure on the UK’s NHS amid the COVID-19 pandemic. The field hospital, which was opened by Prince Charles last week, is the second biggest in the UK behind London’s Nightingale hospital. The 2,000 bed facility will be known as Dragon’s Heart Hospital. Cardiff and Vale University Health Board (CAVUHB) said the first patients were admitted at the end of April with many being transferred from University Hospital of Wales (UHW) and University Hospital Llandough, both in Cardiff.

In the Netherlands, the Rotterdam Ahoy arena has been converted into a temporary care location to relieve the burden on the city’s hospitals. The field hospital is being develop for patients, with or without COVID-19, whose condition is not serious enough to visit a hospital, but require some minor treatment and therefore cannot stay at home. Other patients may be received from hospitals who are recovering from the virus but cannot yet return home. It is anticipated that the arena, which has hosted a variety of sporting events including volleyball, gymnastics and futsal in the last 50 years, will have approximately 680 beds.

The Zagreb Arena in Croatia is another sports stadia that was transformed virtually overnight into a temporary field hospital in early March. The stadia was set up to manage non-critical patients in the event that hospital capacity in the capital was stretched. However, we are delighted to report that as of 30 April, the Zagreb Arena hospital has been disassembled as they had not received a single COVID-19 patient.

Private vehicles are still the predominant mode of transport for most supporters attending sports fixtures in Europe, despite improvements to public transport infrastructure and an increasing focus on walking and cycling. For this reason, many stadia have large car parks that are ideal locations to erect temporary drive-through testing facilities.

Twickenham, the home of England Rugby, has been converted into a drive-through coronavirus testing facility for key workers and NHS staff. The site, one of 32 temporary testing facilities across the UK (which includes several other sports stadia), is part of the UK Government’s testing regime which also includes partnerships with universities and research institutes. The network will provide thousands more PCR swab tests – which can help to identify if an individual currently has the virus – for critical key workers, starting with NHS front line staff.

Similarly, Signal Iduna Park, the home of Borussia Dortmund, has also opened up as a coronavirus testing facility. The North Stand of the 81,000-capacity stadium will serve as a treatment centre for suspected COVID-19 patients, with the club working in cooperation with the Statutory Health Insurance Association of Westphalia-Lippe (KVWL). Dortmund CEO Carsten Cramer said: “I think it’s time to help when things have become so difficult. If we can do that by making our stadium available, I think it’s a wonderful contribution that Borussia Dortmund can make.”

Following a high-level request from Ireland’s Health Service Executive (HSE), Croke Park, home of Ireland’s GAA and Gaelic Games has been converted into a ‘drive-thru’ facility for testing for COVID-19 for designated appointments. From mid-march, medical doctors across the country have been able to refer people who have COVID-19 symptoms, such as a cough and fever, and those who were in close contact with a positive COVID-19 case, for testing.

The vast majority of professional sports teams now have some form of club community organisation (CCO) – often a non-profit entity that uses the power of the club’s badge to engage a variety of population groups in educational activities, health programmes and anti-racism campaigns. Many of these CCOs are also involved with local food banks and their efforts during the COVID-19 pandemic have not gone unnoticed.

Olympique de Marseille fondation (OM Foundation) in partnership with several organisations, are supporting local communities by assembling and delivering food parcels. The partnership is using the Orange Vélodrome as a hub for collection and distribution of food parcels for students and those most at risk of the virus. Approximately 400 parcels are being distributed each week that include non-perishable items such as tinned food, rice and pasta as well as fresh fruit and vegetables.

Italian Serie A football club Bologna has been working with its food and beverage partners to distribute basic food items and health kits to local people in the area. Bologna’s commercial partners including Italpizza, Villani, Piadina Loriana, Yoga, Cerelia, Dino Corsini, Partesa and Granarolo responded in the “right way”. The club will purchase packages assembled food parcels by the food and beverage partners and delivered to relevant associations, including Arca della Misericordia and the Case Zanardi Network for Food Assistance in Bologna.

Championship club Derby County, in partnership with the Derby Food Forum network and Derby County Community Trust, have been collecting food donations from the public since mid-April. The club has provided space for members of the public to drop off items at the West Stand car park just outside their Pride Park stadium. Derby County’s matchday catering partner, Delaware North, also donated existing concourse stock scheduled to be sold at fixtures that have been cancelled due to the pandemic. The drop-off site is being staffed by volunteers from the Club and Community Trust.

Healthy Stadia in partnership with our sister organisation, Food Active, has developed a range of guidance materials for use by community sports organisations that may be supporting food banks and/or vulnerable members of their community.

One of the most innovative and perhaps generous responses involves current La Liga champions, Barcelona. They are to give a sponsor naming rights to the Nou Camp for the first time and donate all the revenue to fighting COVID-19. Barca’s stadium, known as Camp Nou in Catalan, has never had another name since opening in 1957. Barcelona have given the title rights to the Barca Foundation, who will find a sponsor for 2020-21, which could be worth tens of millions of euros.

OM Foundation are also using Orange Vélodrome to accommodate 18 women and their children who are at severe risk of domestic violence. The public health community and police forces/civil guards across Europe have been concerned that lockdown measures put in place to reduce transmission of coronavirus could have a knock-on, negative impact on households in terms of instances of domestic violence, amd this is broadly reflected in the increase in reports. However, some are concerned that many cases are still going unreported.

Villa Park, home of Aston Villa has been transformed into a maternity facility for new and expectant mothers. Villa have teamed up with Sandwell and West Birmingham NHS Trust to provide care to women whoa re 24 weeks pregnant. In addition to postnatal and antenatal care by midwives, health visitors will also hold appointments for new parents and newborn hearing screening tests. There will also be postnatal clinics for those who have been discharged, too. The fully-equipped venue will take over the boxes in the North Stand and will be staffed by 10 midwives, and two support workers, with two health visitors taking appointments.