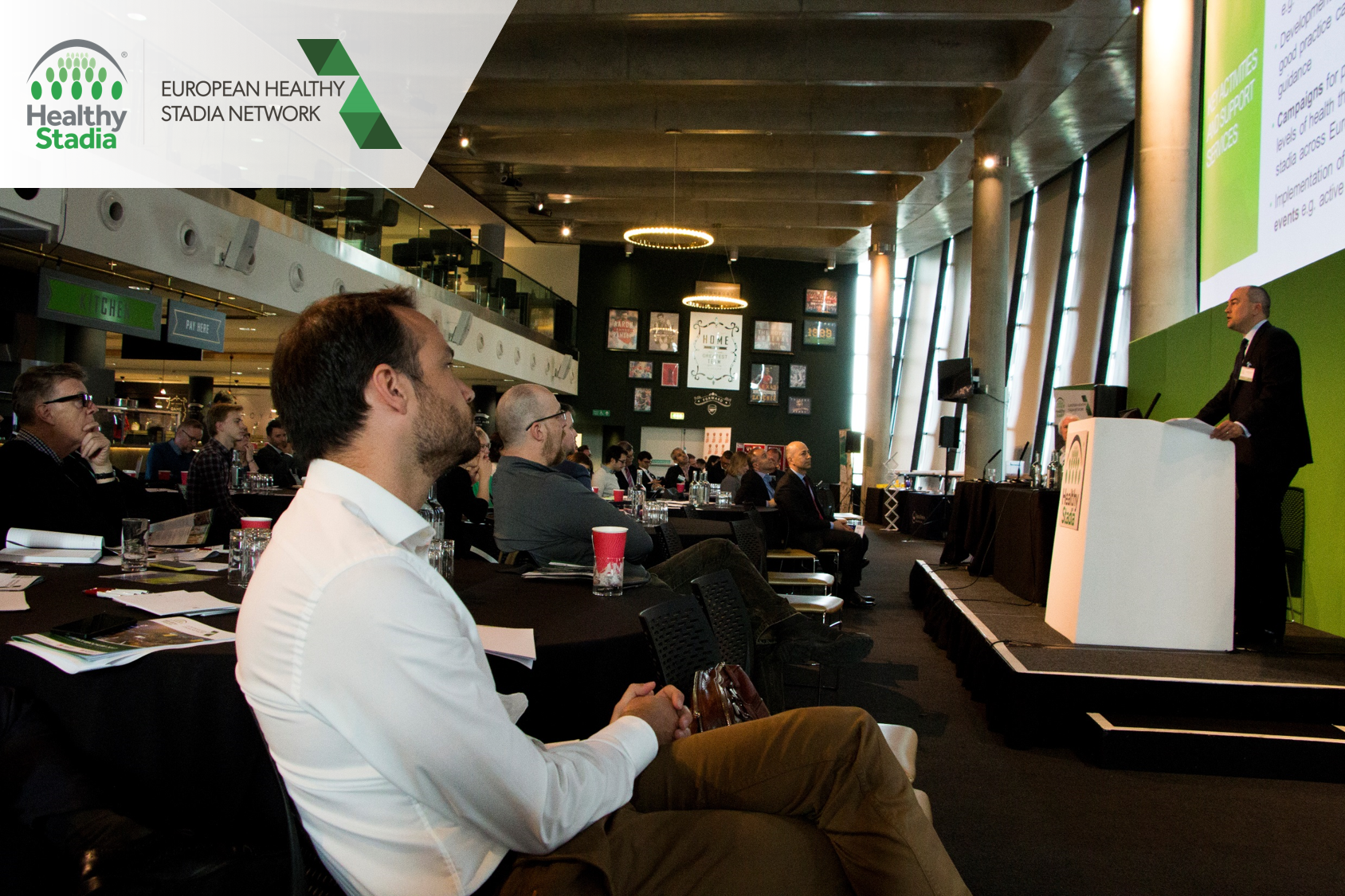 05 May Extra Time: Reflections on the European Healthy Stadia Conference 2017

Posted at 11:35h in News by Michael Viggars

The power of sport to positively impact the health of fans, local communities and stadium workforces was clear for all to see at the fourth European Healthy Stadia Conference held at Arsenal F.C.’s Emirates Stadium on Thursday 27th April.

Over 200 delegates representing professional and amateur sports clubs, national associations, governing bodies of sport and stadium operators gathered to celebrate 10 years of the European Healthy Stadia Network which provides support to clubs, stadia and tournament organisers in developing their venues as ‘health promoting settings’. The conference featured 35 speakers, and was opened with a keynote speech from Ivan Gazidis, CEO of Arsenal Football Club.

Building on previous conferences in Geneva and Manchester, the 2017 edition of the conference had a special emphasis on research partnerships that have developed between academic institutions and practitioners working in the cross-cutting fields of professional sport and public health. One of the primary questions raised on the day was how best to measure the impact of health interventions delivered through sport, a subject that has been foregrounded through a Healthy Stadia themed special edition of Sport in Society Journal (Taylor & Francis Press) featuring 12 new articles from researchers and practitioners in the field. 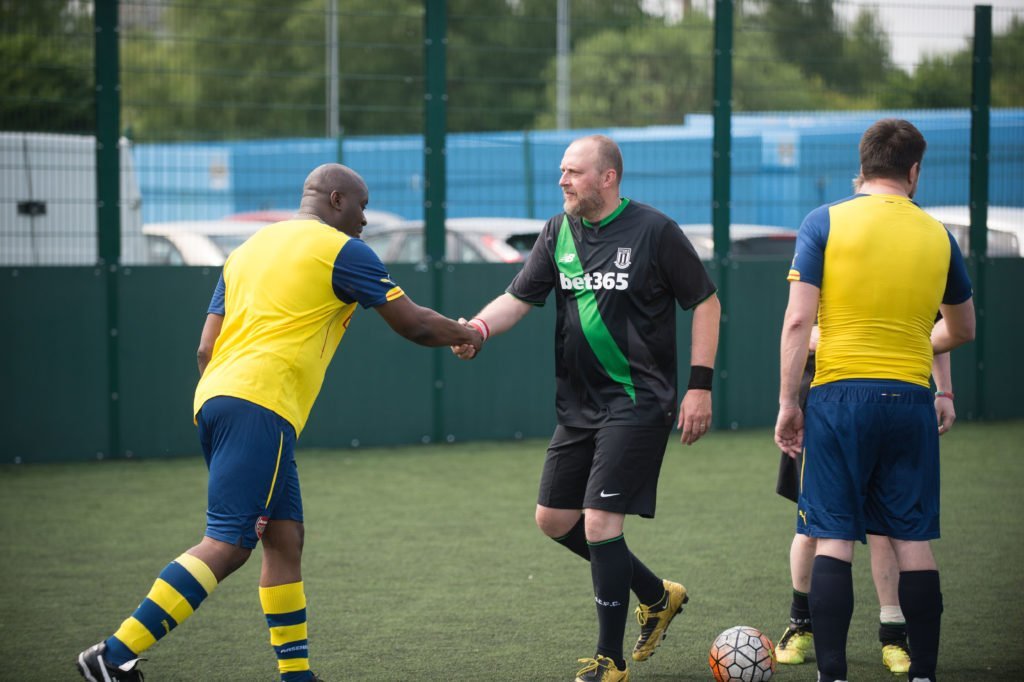 The EuroFIT programme has helped football fans to get active and reduce the amount of time they spend sitting each day.

The EuroFIT Programme, which has recently been adopted by the Portuguese Football Federation, is one such example of researchers working closely with sports clubs to build on previous successful health interventions. Using iconic stadia facilities, EuroFIT has successfully raised physical activity levels whilst simultaneously reducing sitting time amongst overweight football fans affiliated with 15 elite clubs from four European nations. Successes to date were presented by programme lead, Professor Sally Wyke from the University of Glasgow and André Seabra, Director of the Portuguese Football Federation’s National Football School and we look forward to disseminating initial findings from the trial later this autumn.

The pan-European obesity epidemic has certainly put increasing levels of physical activity higher up the agenda for many governments, and it was fascinating to see how the sports sector is now championing the cause and working closely with public health and health promotion specialists to help ‘activate the inactive’. Sarah Ruane, National Strategic Lead for Health and Sport at Sport England briefly discussed their new strategy ‘Towards an Active Nation’ and detailed a raft of new funding opportunities for community sports organisations to provide opportunities for women, children, families and BAME communities to undertake and maintain regular physical activity.

Encouraging women and families to be physically active is also a top priority for UEFA this summer as they get ready to launch ‘Make A Healthy Heart Your Goal’. The campaign, supported by World Heart Federation, KNVB and the Dutch Heart Foundation, will run alongside the UEFA Women’s EURO 2017 tournament in the Netherlands and will encourage women from across Europe to get ‘Match Fit’ by improving their diet, stopping smoking and taking more exercise, either through playing sport or choosing to walk or cycle short distances.

Several other presentations on the day focused on factors affecting cardiovascular health including the Move Like a Pro programme coordinated by Premiership Rugby tackling levels physical inactivity amongst men; the tobacco-free stadium policy implemented by UEFA across the ten host venues in France during EURO 2016, with support from Healthy Stadia; and, research from the PHANSMER study group into food and drink sponsorship and availability at the Rio Olympics. In addition, the Institute of Alcohol Studies launched brand new research on the relationship between alcohol sponsorship and sport, including how alcohol companies are evading sponsorship restrictions at major tournaments. 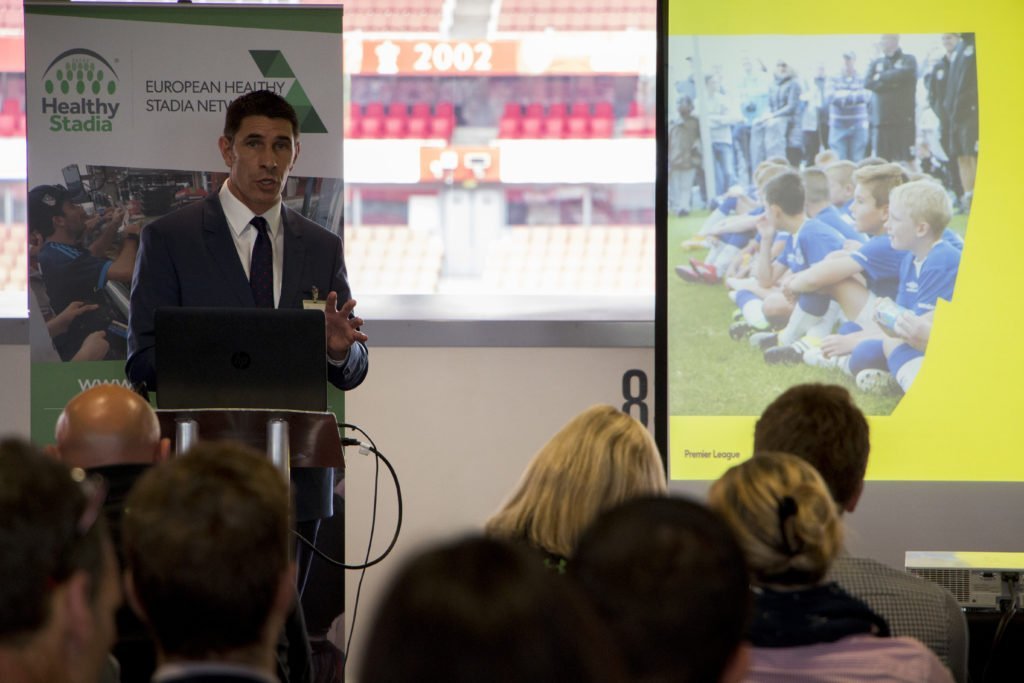 Paul Lake, Club Support Manager at the English Premier League, discussed the importance of mental health first aid training in club academies and the framework put in place by the Premier League to support individuals at various stages of the game.

Even in the early stages of the Healthy Stadia movement a decade ago, there was some fantastic examples of individual clubs and stadia addressing the physical health and wellbeing of fans, local communities and stadium workforces but it is truly encouraging to see so much progress in tackling mental health issues through sport and sports settings and the stigma that comes with such problems.

The recently-launched Offload project from Rugby League Cares, perfectly illustrates the role professional sport can play in providing a supportive environment for men to consider their mental health and wellbeing. Over the course of 10 weeks, the Offload projects helps men to build their own mental fitness with humour in a relaxed atmosphere, developing skills and coping strategies in addition to learning to recognise when others may need help and support.

The immediate success of this project, and the approach taken, challenges the long-held belief that men are difficult to refer into services by simply asking “are we reaching out to them in the right way?” By tailoring their offer, Widnes Vikings, Warrington Wolves and Salford Red Devils are having a positive impact on their lives of men and their friends and families were traditional approaches have previously failed.

And it isn’t just the approach that is being adapted for particular demographics. Swim England (formerly the Amateur Swimming Association) presented pioneering work on Dementia Friendly Venues and how their environmental checklist is supporting local facilities to make small, innovative changes to the pool environment to better suit the needs of those suffering from dementia.

“KNVB was pleased to speak at the European Healthy Stadia Conference 2017 to share upcoming work on the Make a Healthy Heart Your Goal campaign for UEFA Women’s EURO 2017, and to learn about good practices in health interventions delivered through sport. KNVB will focus their domestic CSR strategy on healthy lifestyles, especially for children. In the Netherlands only 23% of the children get their daily recommended amount of exercise. Our goal is to improve this number to encourage children to play football at the grassroots clubs but also exercise at home.”

“The European Healthy Stadia Network is proud to host its fourth European Conference at the Emirates Stadium. We are particularly pleased to bring together a wide range of clubs, governing bodies and health agencies, and in addition many academic researchers who are helping sports organisations to measure the impact of stadium policies and community interventions promoting health.”

“This was a very good conference. I particularly liked the balance between researchers, NGOs, sports professionals… This made for a lively, successful day.”

Michael Salla, Director of Health and Sport, Everton in the Community:

“Refreshments were excellent – some of the best lunch options I have enjoyed at a conference. Healthier breakfast options on arrival and healthier break offer (fruit skewers as opposed to biscuits, cakes) were also excellent.”

“It was great to be exposed to the presented topics and know about the good work that is being done by others.”

“Peter Krustrup’s session was very good and built a strong case. Also a good mixture of speakers from across the UK. Paul Lake was also excellent – very important to discuss mental health in sport.”

The Conference was organised by the European Healthy Stadia Network, and supported by the World Heart Federation through its partnership with UEFA. The next conference is planned for Autumn 2019. Photos from the conference and slide presentations to follow shortly.

Sports Stadia and active travel: if you build it will they cycle?
Harnessing the Power of the Badge: the EuroFIT project