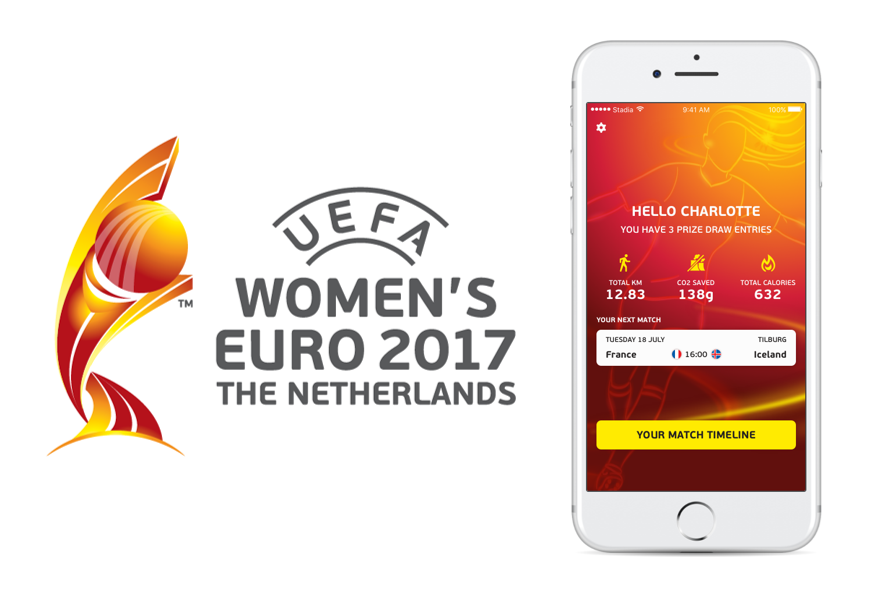 Posted at 08:25h in News by Michael Viggars

Fans and staff travelling to UEFA Women’s EURO 2017 fixtures in the Netherlands are being encouraged to walk and cycle to host stadia in a bid to boost heart health, burn calories and protect the environment.

Thousands of fans, including women, children and families from all over Europe, will travel to the Netherlands this summer for UEFA Women’s EURO 2017 all eager to see a festival of football.

Interest in women’s football has grown enormously over the past decade, but this growth in the professional game has not been matched with an increase in physical activity amongst women across Europe.

Often the easiest way to be active is to walk or cycle as part of your everyday lifestyle. Therefore, the European Healthy Stadia Network, in partnership with UEFA and the World Heart Federation, have developed a mobile app to encourage fans and staff attending UEFA Women’s EURO 2017 matches to consider walking or cycling to host stadia in order to boost activity levels, and present Active Travel as a viable means of transportation for supporters on a matchday.

The free-to-use Active Match App will provide users with directions and mapping to host venues plus information on where bicycle locking facilities are located at each stadium.

The App technology will detect any journey taken to matches by bike or on foot, and upon arrival at host venues users will receive information on their distance travelled, calories burned and CO2 emissions saved. Each successful journey or part-journey on foot or by bicycle will also enter participants into a prize draw to win tournament footballs and a pair of VIP tickets to the Final in Enschede on Sunday 6th August.

“Many international sporting mega-events have focussed too heavily on encouraging people to be physically active after a tournament has concluded, as part of building a positive legacy.

“The Active Match App, part of the broader A Healthy Heart Your Goal campaign, will help people be physically active during UEFA Women’s EURO 2017.

“We hope that the App will foster an ‘active’ culture, encouraging both fans and tournament staff to choose walking and cycling as the default choice for all shorter journeys.”

“UEFA is committed to helping people from all over Europe look after their heart and lead healthier lifestyles.

“Playing football is a great way to be physically active, but we must also consider other practical ways we can include more physical activity, such as walking and cycling, into our everyday lives.

“By demonstrating to the football family that walking and cycling are viable modes of transport on a matchday, we hope to provide more opportunities for fans to leave their car at home, which will not only be of great benefit to their health, but also complement UEFA’s sustainability agenda, by reducing CO2 emissions.”