How can Sports Clubs and Sports Stadia contribute to Active Cities? 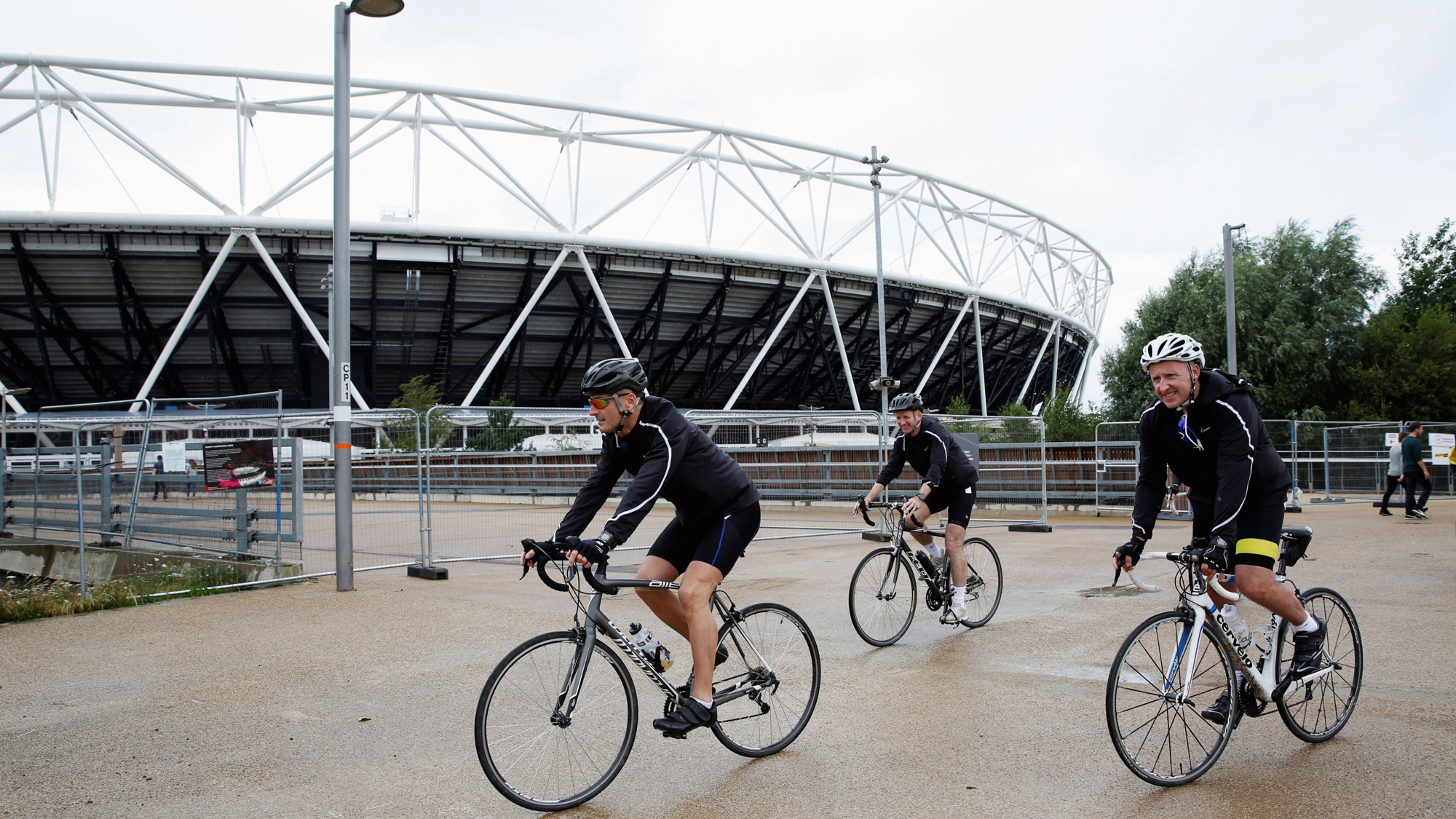 07 Dec How can Sports Clubs and Sports Stadia contribute to Active Cities?

Posted at 16:56h in News by Michael Viggars

Healthy Stadia has contributed to a number of events across Europe in recent months focusing on how we can use physical activity, active travel and sport to encourage individuals and communities to become more active. We reflect on these projects and events and discuss how sports clubs and sports stadia can play a part in developing Active Cities. 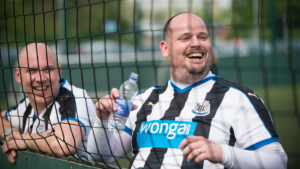 Throughout Europe, many professional clubs, their foundations or community trusts are engaged in Corporate Social Responsibility (CSR) activities that tackle some of the most pressing issues in society including discrimination, youth unemployment and social inclusion.

Increasingly, clubs are delivering evidence-based health programmes that have been scientifically proven to be effective in preventing or treating diseases such as obesity and cardiovascular disease. The European Fans in Training or EuroFIT programme is once such example.

EuroFIT is a groundbreaking health and wellbeing programme developed by a consortium of European Universities that harnesses the intense loyalty that many fans have for their club, attracting them to a behaviour change programme delivered by football coaches at club facilities. Over 20 football clubs in the UK, Netherlands, Norway and Portugal including Manchester City, PSV Eindhoven, BK Rosenborg and SL Benfica have delivered EuroFIT to over 1,100 overweight male football fans helping them to increase their physical activity levels, improve their diet and enhance their wellbeing.

The success of the programme has led to a formal partnership being signed between the Portuguese government’s Directorate-General for Health and the Portuguese Football Federation in April 2017. This partnership positions EuroFIT as a core component of Portugal’s national physical activity strategy, helping overweight male football fans to lose weight and get active. 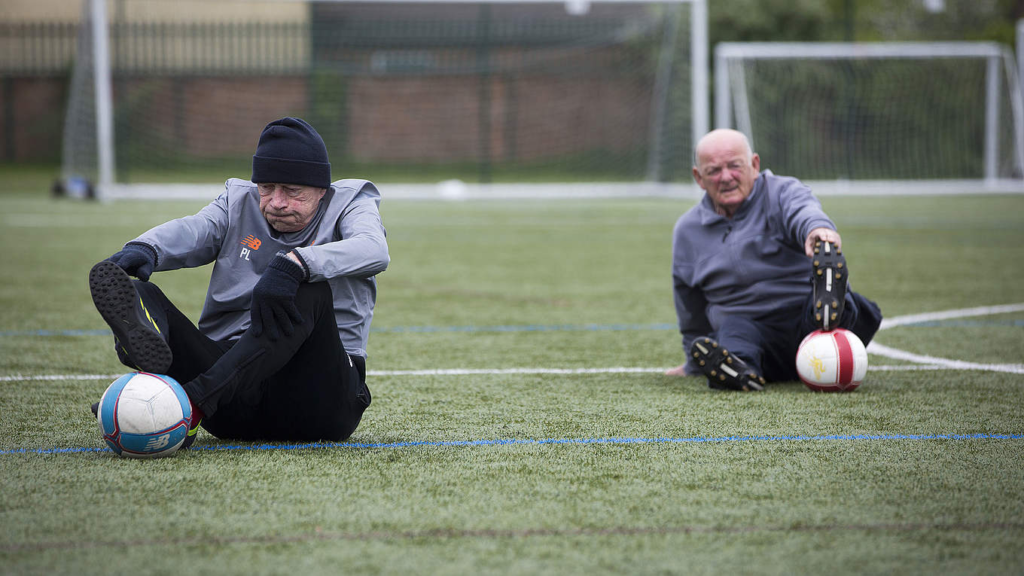 Warming up: Older men stretch out before a walking football session in Germany

Although many sports clubs across Europe have an extensive portfolio of community programmes, grassroots sport is still very much at the core of many club’s delivery and business models providing opportunities for children and young people and increasingly older people through activities such as walking football.

Unfortunately, funding for grassroots sport has fallen across Europe following the financial crash in 2008. Since then, austerity measures have led to the sale and / or closure of swimming pools, leisure centres, sports halls and football pitches. The cost of hiring facilities has also increased, reducing the public’s ability to take part in organised sport, particularly those from deprived backgrounds most in need of help and support in relation to their health and wellbeing. Following the London Olympics in 2012, the same Olympic Games that promised a sporting legacy for the general public, participation in sport actually decreased. Meanwhile our waistlines continue to grow and health services become increasingly stretched.

In the UK, very few sports stakeholders can afford to develop or renovate existing facilities and this funding void has invited the likes of McDonald’s and Mars to sponsor grassroots football. Whilst these brands use sponsorship deals and partnership arrangements to project an altruistic image, in truth they use sport as a platform to enhance their brands credibility and create a ‘health halo’ effect around products high in fat, salt and sugar. Earlier this year, we looked at the UK football’s ingrained relationship with junk food brands and together with the Football Supporters Federation, we’re now calling for the UK football family to reconsider its relationship with these brands.

Alongside measures to curb junk food sponsorship in sport, increased funding and support from national and local government is needed to reinvigorate grassroots sport if we are to turn the tide on obesity, increase physical activity levels and reduce sedentary behaviour. The EU Erasmus + project, Promoting Active Cities Throughout Europe or PACTE will focus on physical activity rates across Europe from a municipal perspective.  In the UK, additional financial contributions from the Premier League would also help. But organised sport is not the only way for sports clubs and sports stadia to contribute to the Active Cities movement. 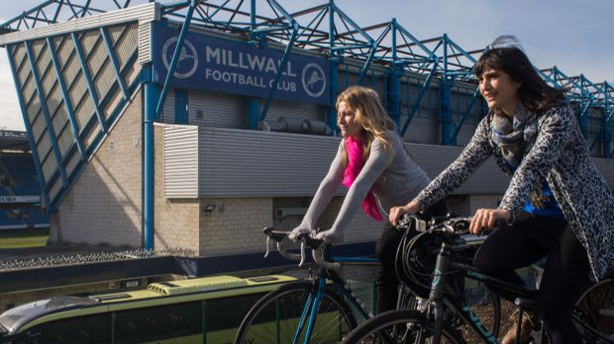 Cycling to stadia: clubs have a lot to gain from promoting walking and cycling

Over the past few decades, our society has come to rely more and more on the private car, with towns and cities now built to accommodate thousands of car-owning commuters and consumers. Older generations may have walked to school but now parents regularly take their children to school in their cars. This has resulted in fewer people walking and cycling, even for short trips. More often than not, the car is the automatic choice, especially when people are travelling to unfamiliar places, as is often the case for supporters travelling to sports stadia.

But many people would like to take part in more physical activity but are prevented by lack of leisure time, opportunity and expense. However, walking and cycling for everyday trips can play a big part in helping people maintain recommended levels of physical activity. Organisations such as professional and amateur sports clubs can help to develop an active culture by encouraging their fans, visitors and staff to consider walking and cycling to matches and events.

Walking and cycling hold great potential as inexpensive, and accessible ways in which fans and members of stadia workforces can reduce their risk from chronic diseases, especially when integrated into their daily or weekly routines. One might argue that pollution inhaled navigating the city streets on foot or by bicycle is a reason to stay in your car, but the benefits of being physically active actually outweigh these risks.  Having a detailed active travel plan can not only help to reduce congestion and improve air quality, particularly at peak times, but also contributes to sports organisations CSR profiles. Healthy Stadia’s Active Travel Guidance will be updated in 2019.