How can sports sponsorship be a force for good? 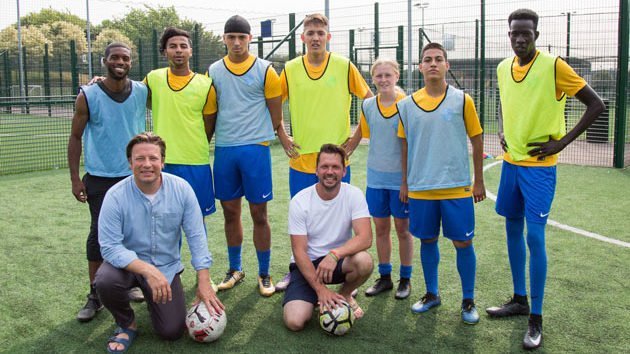 22 Feb How can sports sponsorship be a force for good?

Posted at 20:30h in News by Michael Viggars

In his special guest blog for Healthy Stadia, celebrity chef and food campaigner Jamie Oliver looks at energy drinks and the negative impact they are having on children and young people. He also looks at the association between energy drinks and sport, questioning the marketing practices of these companies and their exploitation of professional football to promote high-sugar, high-caffeine products. This was a topic that was featured on Jamie and Jimmy’s Friday Night Feast in consultation with Healthy Stadia.

Last year, Jimmy and I spoke to pupils and teachers at Harris Academy about energy drinks for an episode of our Channel 4 show Friday Night Feast. We asked; how many energy drinks kids have in one go, when they drink them, and the effects they have.

I knew these drinks were popular, but what I heard really hit home. Teachers told me they had to plan alternative lessons for when the kids were ‘on’ energy drinks. Kids told me how these drinks massively affected their ability to concentrate. It was pretty shocking.

Before retailers took action by banning the sale of energy drinks to under 16s,  69% of adolescents and 24% of under 10s in the UK were consuming energy drinks[1], even though the warning on the back of the can says they’re “not recommended for children”. We heard how many kids associate them with high performance, and more specifically, with sport. Fast forward to this episode of Friday Night Feast, one year on, and we’re back to dig further into this issue.

Jimmy and I went to talk to some young kids who love playing football. I saw a lot of my younger self in them – bursting with energy and really having fun with it. But when I asked them if they drink energy drinks to enhance their performance the answer was really clear: absolutely not.

We also talked about sponsors. So many of their favourite sporting events had sponsorship deals that they said sent a really mixed message: Cadbury is the “official snack partner” of the Premier League, for example.

It wasn’t always like this. Did you know that in the 1980s, the League Cup used to be called the Milk Cup? It was sponsored by the Milk Marketing Board. For much of the 1990s it was known as the Coca-Cola Cup, and now it’s the Carabao Cup, sponsored by the energy drink.

How can sports sponsorship be a force for good?

When Amsterdam refused to co-sponsor any event alongside fast food brands as part of a comprehensive health push, the rate of childhood obesity fell.

Britain is hosting several massive events in the next few years. We’ll be centre stage for the Cricket World Cup in 2019, the Cycling World Championships in Yorkshire in 2019, Euro 2020, the 2022 Commonwealth Games… And maybe even the 2030 World Cup!

Sponsorship agreements for these events will be agreed in the next months and years. Wouldn’t it be amazing if Britain uses the global spotlight to lead the way and make these events junk-free?

The Football Supporters’ Federation for England and Wales has recently passed a motion to work with Healthy Stadia on a new campaign asking for further restrictions on unhealthy partnerships in football – but is anyone listening?

You could post on social media: “I want my Mayor to make sports sponsorship a force for good for all our kids #HealthySponsorship”