Marketing to Children through sport: How sugary drinks companies circumvent their own policies 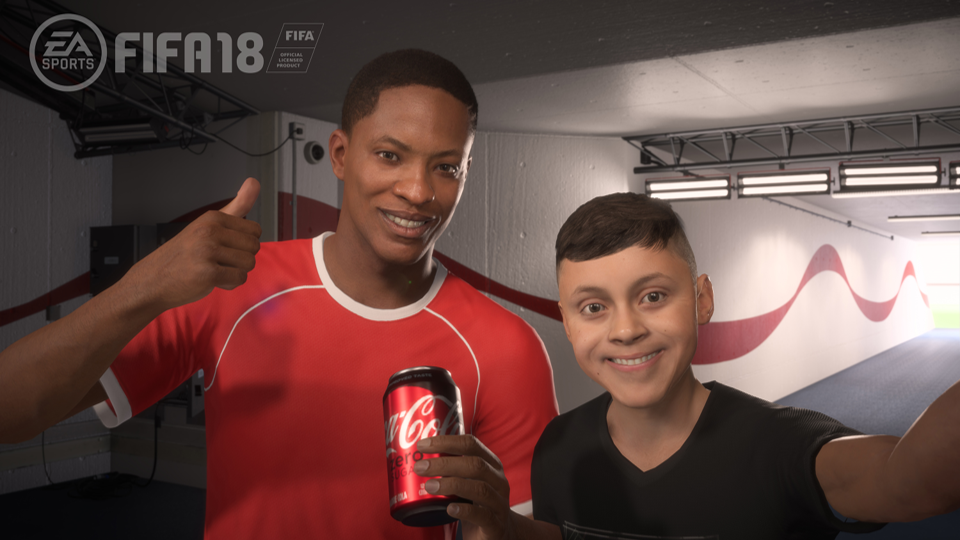 31 Jan Marketing to Children through sport: How sugary drinks companies circumvent their own policies

Posted at 14:02h in News by Michael Viggars

Last week, Caroline Cerny from the Obesity Health Alliance explored some of the loopholes in junk food marketing regulations. In this blog, Beth Bradshaw, Project Officer at Food Active, looks at the myriad of ways soft drink manufacturers are using sport as a platform to promote high-sugar drinks.

It is commonplace for soft drinks manufacturers to align themselves with sport and sports organisations. For the likes of Coca-Cola, involvement in sport is part of a multi-faceted marketing strategy designed to attract new customers and most importantly, maintain sales to existing customers.

Coca-Cola’s involvement in sport, particularly football, is well documented. As part of their many sponsorship deals with sports organisations, their logo appears on advertising hoardings around the sides of pitches, on sport-related merchandise, next to players and athletes as they are being interviewed. Indeed, the Coca-Cola logo will soon appear alongside the Premier League trophy on a nationwide tour and during Premier League matches.

So what’s the problem with this? Well, if you watch a game of football on the television with your children, chances are they will see the Coca-Cola logo several times. Repeated exposure creates brand familiarity which is positively correlated with an individual’s intention to purchase a product, i.e. the more you see it, the more likely you are to buy it. If children can’t buy it themselves, they’ll ask you for it.

This may then have a knock-on effect in terms of frequency of consumption and in the case of high-sugar drinks such as Coca-Cola, which contains nine teaspoons of sugar in one 330ml can, over-consumption can lead to acute issues such as tooth decay and long-term issues such as weight gain.

It is therefore important for governments to   introduce effective legislation to protect children and young people from junk food and soft drinks marketing. But first we must understand their increasingly sophisticated marketing techniques.

Food Active has put together three case studies looking at how football is being used as a platform to market high-sugar drinks to children and young people, with many using sport to circumvent so-called ‘responsible marketing policies’.

For many young people, FIFA isn’t the international governing body of football, it isn’t the FIFA World Cup. FIFA is first and foremost a video game.

By September 2018, EA Sports, the digital games developer behind FIFA 2018, had sold 24 million copies of its football-simulation video game globally across six different video game platforms. EA Sports has boasted of 3.5 million daily players. Although no usage data exists in the public domain, it is safe to say that a huge proportion of this audience will be children and young people.

You can play FIFA 18 in a number of different ways, but one particularly interesting game mode is FIFA Ultimate Team. Here, players can spend real money on digital card packs with the chance of winning coveted players, and kits – including Coca-Cola branded jerseys – and other items to personalise and manage their own team.

Another interesting game mode, called Journey, documents the rise of 18 year-old Hunter. At one stage Hunter is involved in the filming of a commercial, drinking a Coca-Cola product to make himself feel better after a poor performance..

Yet, according to Coca-Cola’s global Responsible Marketing Strategy they do not design their marketing communications in a way that directly appeals to children, going on to state they will specifically not use, “Branded sponsorship of sporting and entertainment events which primarily target children under 12”.

Alban Dechelotte, senior entertainment marketing manager at Coca-Cola said, “Fans of the FIFA game, especially younger fans, share a 360-degree passion for football – playing, watching and gaming… So we decided to connect the love stories Coke has with the real and virtual worlds of football through our partnership with the world’s biggest football video game.”

This suggests a clear disparity between Coca-Cola’s policy on the one hand, and what they both do and say in practice on the other hand. 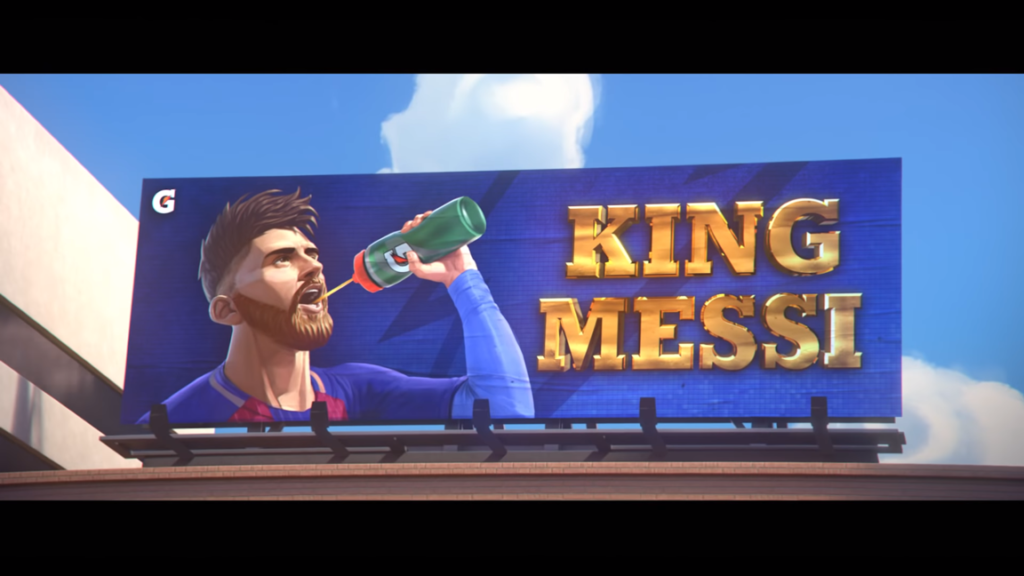 Just prior to the FIFA World Cup 2018, Gatorade, an American sports drink manufacturer published a four-minute animation depicting Lionel Messi’s journey to Russia – #HeartOfALio. The film tells the inspirational story of how Messi has so far overcome every hurdle to perform at the highest level. However, the animation mentions a ‘missing trophy’ hinting at Messi’s lack of success with Argentina at an international level.

Whilst the video seemingly focuses on the Argentinian forward, the Gatorade logo appears no fewer than 14 times, on towels, bottles, advertising hoardings and bottles in advertising hoardings. Messi is even seen consuming Gatorade during an intense training period leading up to the tournament in Russia.

#HeartOfALio has racked up over 15 million views and was voted #TheYouTubeAd that deserves a Best Picture by viewers. A copy of the video uploaded by FC Barcelona has 11 million views alone.

Similar to the case study with FIFA 18, a large proportion of viewers will likely have been children and young people. Seeing the likeness of one of the greatest players of all-time consuming Gatorade may lead young people to associate success on the field with this high-sugar product.

Again, similar to Coca-Cola, PepsiCo’s Global Responsible Advertising and Marketing to Children Policy includes a prohibition on advertising products that do not meet certain nutritional requirements in television programme whose audience profile is made up of greater than 35% children who are under the age of 12. 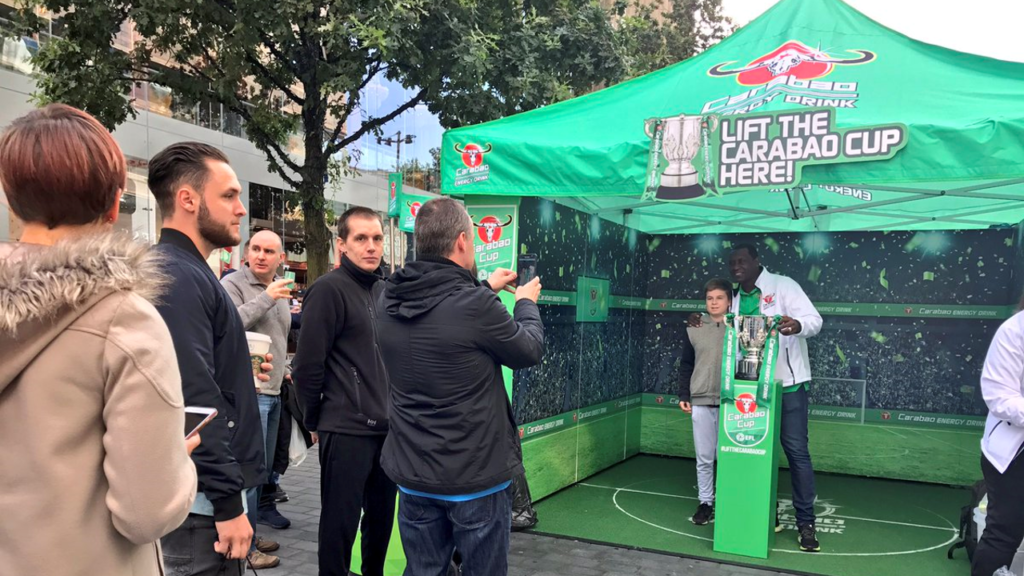 Carabao is a Thai energy drink, superficially resembling its competitor Red Bull. Carabao ribbons now adorn the competition’s trophy and the match ball and Wembley Stadium will be bathed in green at the cup final at the end of February.

Several roadshows were held across the country in 2017 to celebrate the launch of the sponsorship and featured former England, Leicester City and Liverpool FC striker Emile Heskey, posing for photos with fans, including children and young people, and handing out free samples of the Thai Energy Drink. Also, part of the promotional activity was an on-pack promotion to win tickets to matches, including the Carabao Cup Final 2018, as well as mini footballs and instant case every 90 minutes.

In the 2017-18 season, there were 87 Carabao Cup fixtures with a total match attendance of 1,454,812, with millions more watching from home. Everyone in attendance at these matches or sitting on the sofa at home will have experienced repeated exposure to the marketing of Carabao energy drinks.

Carabao is a growing company and its partnership with EFL was designed to increase brand familiarity and test whether they could claim a significant proportion of the market in the UK. At present, Carabao do not appear to be part of the British Soft Drinks Association which operates a voluntary code of practice on the marketing of energy drinks to under 16s where the audience is greater than 35%, and therefore are not a signatory. Carabao’s Corporate Social Responsibility Policy also fails to mention anything on the issue of marketing high-caffeine products to children.

Perhaps the easiest way of circumventing voluntary policies is simply not to sign up to them in the first instance. 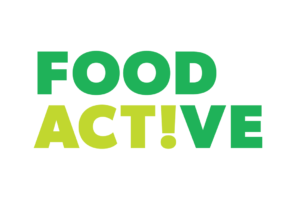 Beth Bradshaw is an Associate Registered Nutritionist and Project Officer at Food Active, Healthy Stadia’s food and nutrition partner. Beth formally joined Food Active in 2017, after having secured a placement for her undergraduate Food and Nutrition degree and volunteered throughout her MSc Public Health Nutrition degree at Liverpool John Moores University. She has a passion for campaigning against the marketing and advertising of unhealthy food and drink to children and young people.