Is football bad for your health? How English Premier League clubs are used to promote energy drinks, booze and betting. 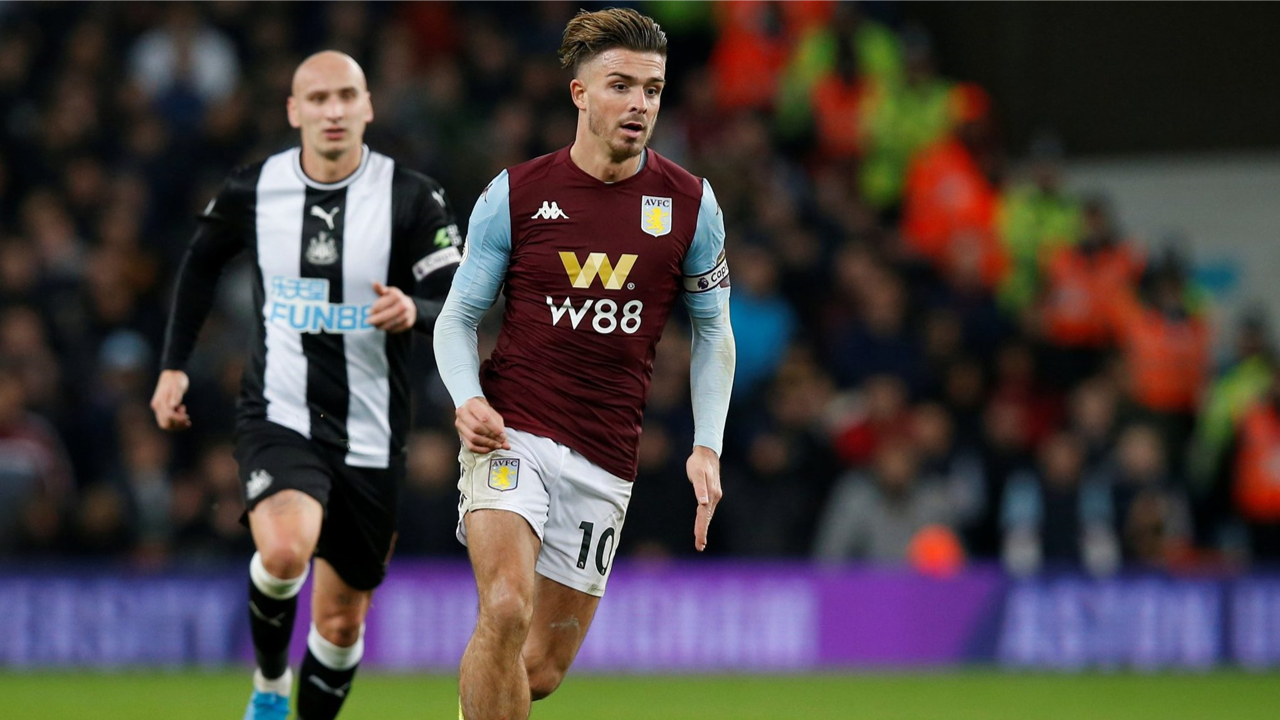 29 Nov Is football bad for your health? How English Premier League clubs are used to promote energy drinks, booze and betting.

Posted at 06:00h in News by Michael Viggars

Football is arguably the most popular cultural pastime in the world. FIFA claim audiences of billions for the Men’s World Cup Final and the English Premier League (EPL) is marketed worldwide with similar aspirations.

Unsurprisingly, such extensive reach is extremely attractive to corporations seeking to market products and services to large numbers across the globe. A well-placed logo, slogan or image can, through the medium of football, travel from the desk of an advertising agency into homes all over the world.

Whilst English football has always had uncomfortable commercial partners – Stanley Matthews featured in an advertisement for Craven A cigarettes back in 1952 – EPL clubs have taken such partnerships to new levels.

Today, EPL teams are partnered with brands, products and services driving some of the biggest health challenges globally and are likely contributing to the growing burden of disease.

Alcohol, gambling, junk food and non-alcoholic beverages are now commonplace in the world’s most popular football league. We know that exposure to advertising impacts on both behaviour and consumption. And yet, there is little to no oversight in terms of the types of products and services being promoted.

Objections to this advertising are rare. However, there have been complaints from recovering gamblers and health experts about the amount of betting advertising in football. Gambling brands feature on the front of teams’ shirts, are flashed up on the LED display boards that surround the pitch and are highlighted in the commercials that run on pay-per-view television.

Researchers from the University of Stirling have highlighted the links between football and alcohol whilst Healthy Stadia has raised concerns about the growing association between products and brands that are high in fat, salt and sugar and football sponsorship.

The relationships between these unhealthy brands and sport warrants further investigation. Taking inspiration from colleagues at Curtin University, Australia, who analysed the presence of unhealthy sponsorship in the Australian Football League, we wanted to explore the associations between EPL clubs and alcohol, gambling, food and non-alcoholic beverages.

Firstly, we gathered a list of club sponsors from club websites in both the 2018/19 and 2019/20 season. As in the Australian study, we then applied a traffic light system to grade these sponsors and constructed league tables from the points allocated.

Arsenal and Leicester City were the top scorers, promoting the highest number of unhealthy sponsors in both seasons we considered. Last season, Arsenal had five gambling sponsors whilst Leicester City had the same number in 2019/20. Arsenal receive sponsorship from four alcohol brands in the current season.

In contrast, Brighton and Hove Albion did not promote unhealthy products through their website or on their shirt in either season we considered. However, the club are associated with Monster Energy in 2019/10 in presumably a different kind of partnership.

Last season, 25 gambling brands featured on club websites and nine on the front of players’ shirts. This number has declined slightly in 2019/20 with 19 brands mentioned but with ten now on the front of shirts.

A total of 12 difference alcohol brands featured last season, rising to 18 this season (26 partnerships altogether in 2019/20). This market is dominated by three brands: Heineken and Carlsberg sponsor four clubs each, Carling sponsor three.

High sugar ‘energy drinks’ are also present with Monster Energy Drinks’ logo appearing on the websites of eight EPL clubs and Carabao featuring on Chelsea’s website. There also appears to be an increasing number of ‘sports drink’ partners.

Our findings suggest that sponsorship by risky products in the EPL could be a growing issue. The total league score has increased from 67.5 to 78 points across the two seasons with a similar increase in Red sponsors from 57 to 65.

There are limitations to this approach. We have only looked at partnerships identified through brand logos on official club websites. This is likely to underestimate the number of unhealthy products associated with EPL clubs as this may omit regional and local sponsors and relationships which are not declared.

What fans see on their television or via streaming services, and the brands they are exposed to, are managed by the football clubs and broadcasting companies (Sky, BT Sport and Amazon Prime in 2019/20). Whilst the EPL chooses to look the other way, despite growing concerns about the number of problem gamblers in the UK for instance,  government, can play a role in managing what is broadcast to fans and what the clubs themselves advertise.

We believe a responsible approach to sponsorship is long overdue and, whilst the football industry is happy to accept money from unhealthy brands, it is the NHS and, children and families alike, who pay the price for the normalisation and glamorisation of unhealthy products through football. Our research suggests there is a pressing need for greater regulation in sport sponsorship. 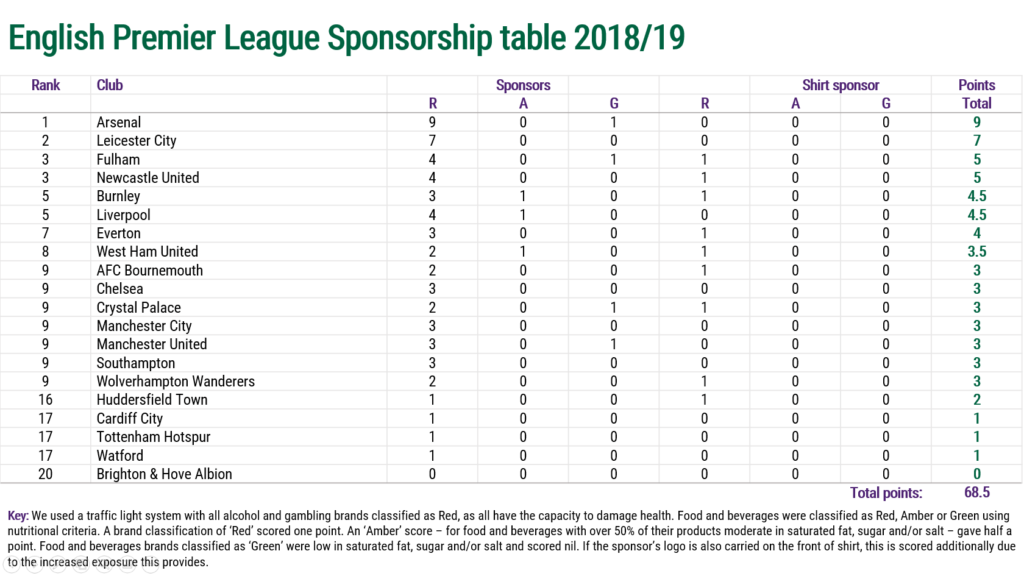 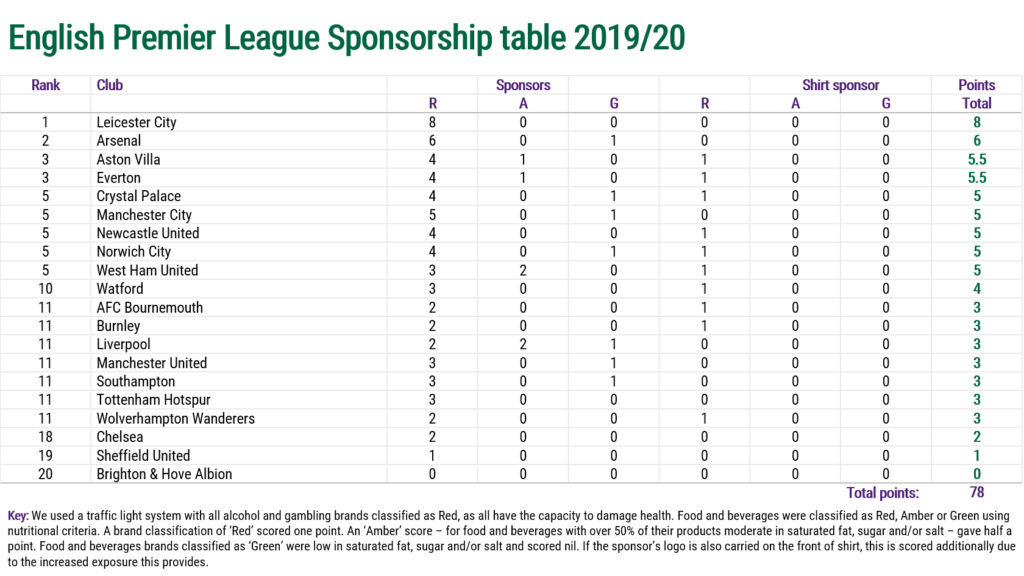