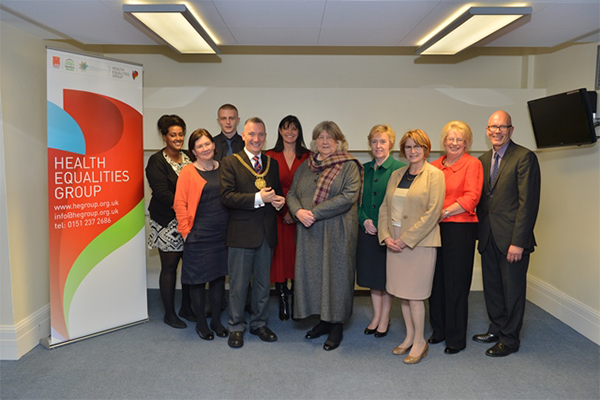 Posted at 09:56h in News by healthystadia

Tackling inequalities in health is a matter of ‘social justice’ according to the newly launched Health Inequalities Group.

At a prestigious launch attended by the Lord-Lieutenant of Merseyside and the Lord Mayor of Liverpool the new social enterprise was launched this week on Monday 7th October to tackle health inequalities; Health Equalities Group – a new health and wellbeing collective that is made up of the established heart health charity Heart of Mersey and the social enterprises HM Partnerships and the European Healthy Stadia Network.

“Given the worsening economic situation is having a direct effect on the health of local people it seems the time is right to bring our charity and two social enterprises under one umbrella to advocate for better health and wellbeing for our communities. In short, tackling health inequalities is a matter of social justice.”

The event also saw the launch of the Group’s first major project following a £200,000 funding award from the British Heart Foundation’s ‘Hearty Lives’ health inequalities programme. The project, delivered in partnership with Liverpool City Council, will work with looked after young people (aged 11-18) to devise the most effective methods of supporting healthier lifestyles through the provision of health information, appropriate training and support.

“I am proud to be involved in the launch of the Group at a time when the need to tackle health inequalities is more pressing than ever before. I am acutely aware, as a previous Chair of Alder Hey Children’s Hospital, of the need to protect children and young people in particular from health inequalities. This is why I am proud that Health Equalities Group’s first major project will be working with looked after children and young people in Liverpool.”

People living in the most deprived areas of the country, on average, have a lower life expectancy than people from the most affluent. Coronary heart disease is a major cause of this. Our £12 million Hearty Lives programme aims to reduce these inequalities in heart disease through working in partnership with local authorities, health practitioners and non-profit organisations. To date, our local Hearty Lives projects have helped an estimated 128,000 people at greatest risk of CHD improve their heart health.

In August 2013, we announced an additional £1 million of funding to expand the Hearty Lives programme with a focus on reducing the risk of heart disease for children and young people. This included the award of £200,000 to Hearty Lives Liverpool.

“It’s a sad fact that many looked after children find it difficult to develop healthy lifestyle habits as they grow-up, through no fault of their own. This can increase their risk of conditions like coronary heart disease later in life. This simply isn’t fair. But through our new Hearty Lives project we’re committed to working with the Health Equalities Group to change this. Together, we can give young people most in need in Liverpool a healthier start in life.”