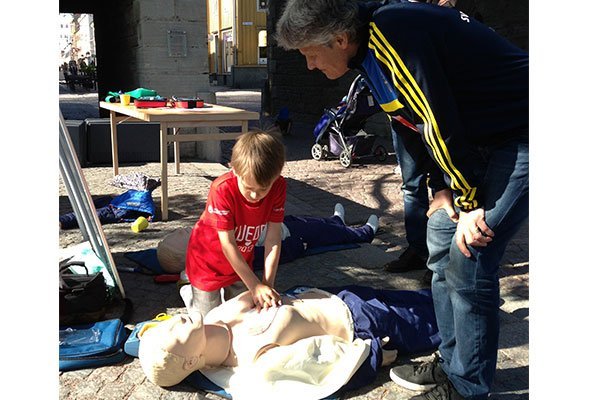 Posted at 15:51h in News by healthystadia

“Make a healthy heart your goal” is a new call to action encouraging women and girls to lead an active, healthy lifestyle and play sports such as football to help reduce their risk of heart disease and stroke. Developed by the World Heart Federation in partnership with UEFA Women’s EURO 2013, the Swedish Heart-Lung Foundation and the Swedish Football Association, “Make a healthy heart your goal” is part of the international Go Red for Women campaign fighting the number one killer of women, cardiovascular disease.

A new survey commissioned by the World Heart Federation shows that 42 per cent of women in France, 34 per cent in the UK,  33 per cent in Sweden, 19 per cent in Denmark and 19 per cent in Germany have insufficient levels of physical activity, increasing their risk for heart disease and stroke. “Make a healthy heart your goal” focuses on awareness building activities concerning the importance of leading physically active lifestyles in Sweden and across the globe in the lead up to and during UEFA Women’s EURO taking place from 10–28 July 2013 in Sweden. The World Heart Federation and its partners will advertise the campaign message through the media, their respective websites and social media channels, as well as through their networks. Educational material on how football can support people to be more physically active and encouraging women to play football as an effective way to take care of their hearts will be distributed around the world via the World Heart Federation member organizations.

On-the-ground activities such as CPR training are planned in Sweden before the competition to engage communities and spread the campaign message to a large audience. Children will be encouraged to be active and learn about the campaign through the Swedish version of the Muuvit platform, a school activity programme promoting a healthy lifestyle, and 60’000 mothers will receive information about cardiovascular disease and be encouraged to take action. The football community will be at the heart of this campaign too, with the local football clubs selling Go Red for Women pin’s,  the “trophy tour” featuring the “Make a healthy heart your goal” message and the support of  Lotta Schelin, a striker for the Swedish team who is the face of the campaign. During the competition, fans will have the opportunity to learn how to perform CPR in the fan zones and they will be encouraged to walk to the stadia, while “Make a healthy heart your goal” will be profiled in stadium.

Show your support: view and share the behind the scene video of the campaign’s image photo shooting featuring the campaign’s ambassador, Swedish player Lotta Schelin.

To learn more about “Make a healthy heart your goal” see: www.worldheart.org/womenseuro