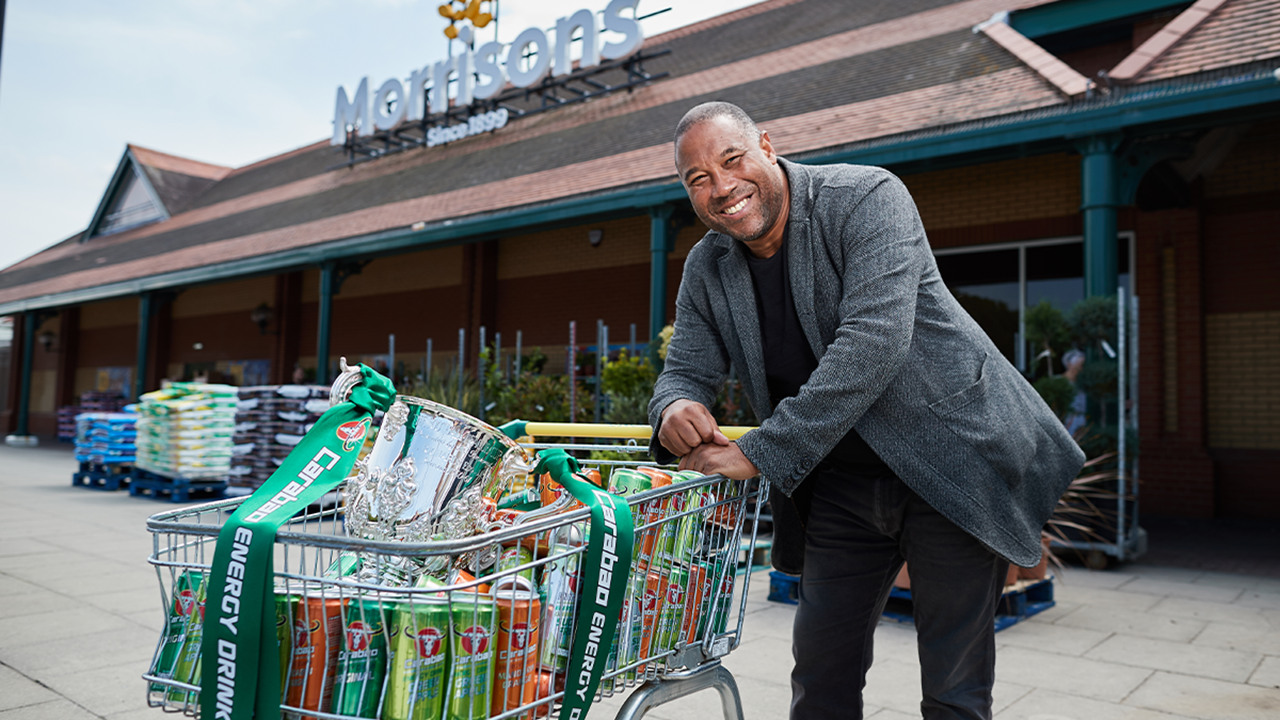 Posted at 09:59h in News by Michael Viggars

Later today, Anfield legend John Barnes and Arsenal favourite Ray Parlour will perform the first-round draw of the Carabao Cup at a Morrisons supermarket near Wembley Stadium. But why would Morrisons risk promoting an unhealthy product to children and young people after they have introduced a voluntary ban on sale of energy drinks to under 16s?

Following calls from public health campaigners last year, all major supermarkets, including Morrisons, introduced a voluntary policy banning the sale of energy drinks containing more than 150mg of caffeine per litre if a customer cannot prove they are over 16.

Carabao’s range of energy drinks contain more than double this threshold (320mg/l) and therefore cannot be purchased by under 16s. In fact, the Morrisons website currently states you cannot purchase Carabao unless you are over 18.

High caffeine intake has been linked to a variety of negative physical effects including increased blood pressure, sleep disturbances, hyperactivity with associated injury, headaches and stomach aches and can even disrupt the rhythm of your heart. Not exactly what children need to help them through school.

However, the picture becomes more concerning still when considering the mental and behavioural effects of energy drinks on children and young people. Regular energy drink consumption has been linked to self-destructive behaviour; issues with behaviour regulation; low physical activity; increased consumption of high fat, sugar and / or salt (HFSS) food; addiction and structural changes to the pleasure seeking part of the brain; and a variety of other risky behaviours such as alcohol, tobacco and drug use as young people enter adulthood.

The volume of evidence led to the UK Government holding a 12-week consultation on ending the sale of energy drinks to children and young people. The consultation is part of the government’s plan to reduce childhood obesity and other health problems in children.

Healthy Stadia, along with dozens of other public health organisations, submitted evidence to support the introduction of a complete ban on sales of high-caffeine energy drinks (EDs) to children last year.

Acknowledging their own responsibility to consumers, including children and young people, Morrisons announced their decision to halt sales to under 16s on Twitter in January 2018 stating that, “After listening to customers’ concerns over children drinking high caffeine energy drinks, we will start asking people buying them for proof they are over 16 years of age”.

After listening to customers’ concerns over children drinking high caffeine energy drinks, we will start asking people buying them for proof they are over 16 years of age. The change will come into effect on 5th March 2018.

Endorsements from sports stars are known to influence pre-adolescent children’s preferences towards HFSS food and drink products. This is why Pepsi sponsor Mo Salah, Gatorade sponsor Lionel Messi, KFC sponsor Cristiano Ronaldo and indeed Carabao have used the likes of Emile Heskey in previous seasons to promote their products.

By leveraging the power of sport and sports celebrity, HFSS manufacturers are attempting to distance themselves from scrutiny over the healthfulness of their products, enhance the reputation of their brand and ultimately sell more products.

Carabao’s continued involvement in football comes at a time when more and more football clubs are seeking to help educate children of the harms of high-sugar, high-acid and high-caffeine drinks through school-based educational initiatives such as Give Up Loving Pop.

Healthy Stadia believes now is the right time for governing bodies of sport, league operators, individual clubs and sports stars to reconsider their relationships with HFSS brands to help reduce children and young people’s exposure to HFSS brands and empower community foundations to perform a positive role in their communities without the risk of hypocrisy.

Healthy Stadia is currently awaiting the outcome of the consultation on the sale of energy drinks to children. For more information on this subject, please email: michael.viggars@healthystadia.eu