Posted at 14:06h in News by healthystadia

The European Fans in Training project (EuroFIT) working with overweight football fans from top clubs across Europe celebrated the achievements of UK men participating in the first year of the project at a recent 5-a-side tournament. Teams from Arsenal, Everton, Manchester City, Newcastle United and Stoke City battled it out to be crowned champions of England at Manchester City’s Etihad Campus on the afternoon of Saturday 4th June.

In the searing Manchester heat, Arsenal prevailed despite a difficult start in their final fixture against rivals Stoke. The Gunners looked to be strolling to victory after winning their first three games without conceding a single goal. However two early goals from the Potters put them on the back foot, but Arsenal’s superior passing ability had shone through with the London club eventually seeing off Stoke in a thrilling 7-3 victory.

Many of the players involved in the tournament led inactive lifestyles before joining the EuroFIT programme, but with a little help from club coaches, they have been given the opportunity to score goals for their favourite team at iconic stadiums such as St James’ Park and Emirates Stadium.

Over the course of the 12 week programme, which started in Autumn 2015, men learnt new skills to make changes in their everyday life, aiming to become more active, reduce sitting time and improve their diet. They also learnt how to make these new behaviours stick for good. To kick off these changes, men were given a new device called a SitFIT™ which provides real-time feedback on how much time individuals spend sitting and how much time is spent moving around.

Researchers from 12 European academic institutions and SME’s are currently evaluating EuroFIT in a multi-centre, randomised controlled trial in football clubs across the Netherlands, Norway, Portugal, and the Premier League clubs mentioned above, to verify its impact on physical activity and sedentary behaviour, physical and mental health.

Professor Sally Wyke, Institute of Health & Wellbeing at the University of Glasgow, comments:

“The guys that have done the programme are making huge progress to a healthier life.  The tournament was testament to their commitment to making healthy lifestyles a reality for them and their families.  The clubs’ community organisations are doing fantastic work.”

EuroFIT is funded by the EU’s Framework Programme Seven (Grant No. 602170) and supported by 15 clubs from the Dutch Eredivisie, English Premier League, Portuguese Primeira Liga, and Norweigian Tippe-ligaen. The UK tournament was coordinated by the European Healthy Stadia Network and funded by the University of Glasgow’s Knowledge Exchange Fund and the Economic and Social Research Council Impact Acceleration Account.

For more information on the EuroFIT project and the different partners involved, please visit http://eurofitfp7.eu or follow them on Twitter @eurofitfp7 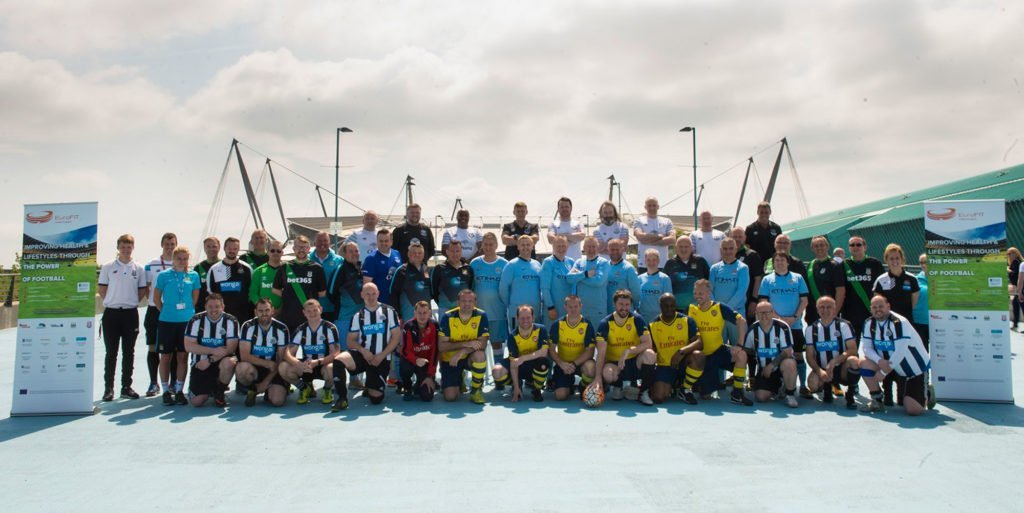