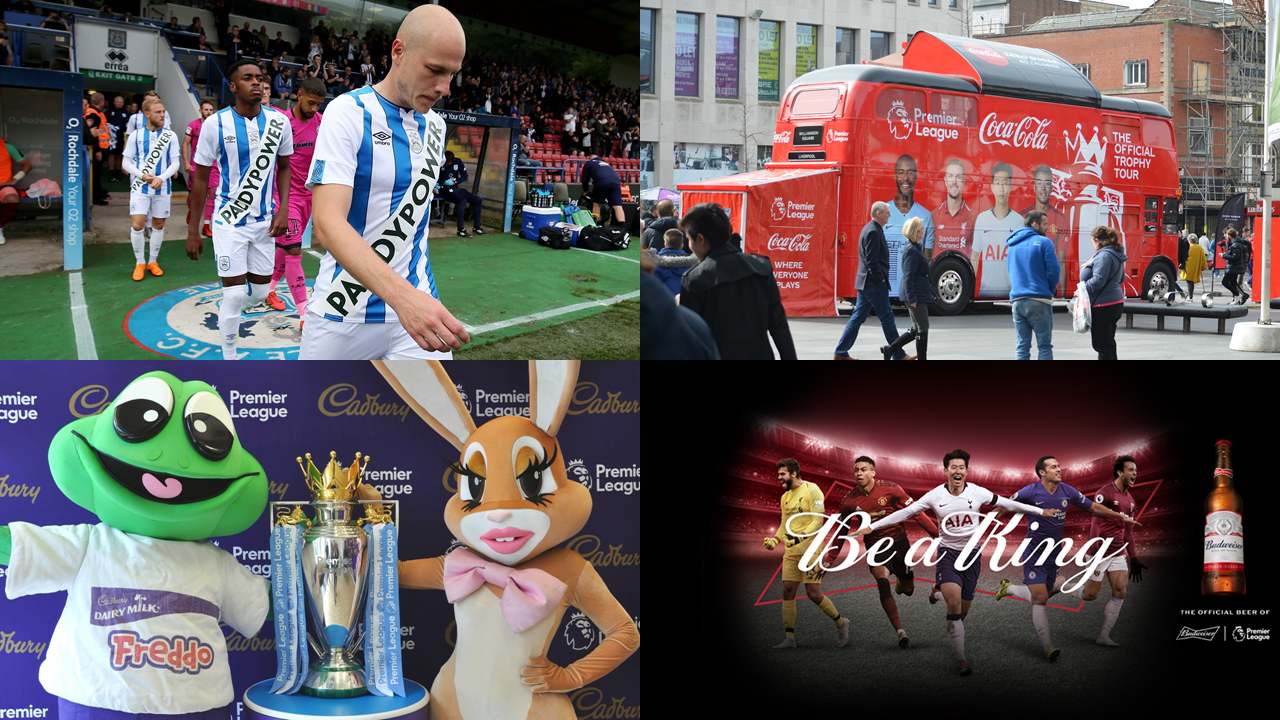 The new Premier League season is nearly upon us. With the transfer window now firmly closed, newly promoted teams will have their sights on survival and big summer signings will be hoping to impress their new managers. But off the field, other players will be looking to make an impact. In this Premier League preview we look at partners and sponsors of Premier League clubs and the Premier League itself for the 2019-20 season.

The Premier League has an enviable global presence facilitated by the growth of digital media and television revenues in recent years. As the most-watched football league in the world, the Premier League is broadcast in 212 territories to 643 million homes and a potential TV audience of 4.7 billion people.

For commercial organisations, it makes good business sense to consider partnering with the Premier League, or one of its clubs, in order to market your products and services. Not only does football provide access to huge audiences but being associated with sport has been shown to increase the desirability of products. In the case of high fat, sugar and salt (HFSS) food and drink items, sport may even create a health-halo effect which can contribute to misrepresentation of the true healthfulness of a given product

Some of the products promoted by commercial organisations, such as sugar-sweetened beverages, calorie-dense foods, gambling services and alcoholic drinks, have raised concern amongst public health practitioners, who point to the contributions these products make to rising levels of obesity, diabetes and poor mental health. Healthy Stadia has been calling for sports organisations to reconsider their relationships with these products and services that may negatively impact on the physical and mental health of their users. So which players should we be concerned about?

Of the 20 Premier League clubs, 10 have gambling sponsors, up from a high of nine last season, ranging from £3m (Norwich City) to £10m (West Ham United) per season. Calls continue to come from academia, public health and politicians to investigate the full extent of the game’s “gamblification” and reduce the harm gambling is causing to society. There are an estimated 450,000 problem gamblers in the UK, including some 55,000 children – and it’s not just the UK that is suffering from gambling-related harm.

SportPesa, Everton’s shirt sponsor, has been criticised for its role in the gambling epidemic in Kenya, and with so many east-Asian betting companies sponsoring Premier League teams, it isn’t too much of a stretch to imagine that Chinese fans of the Premier League may also be exposed to harm.

The bad press is now driving a range of innovations in gambling companies marketing and sponsorship tactics in a bid to make them appear more socially responsible. Paddy Power have recently “unsponsored” Huddersfield Town leaving their shirt sponsor-free and are calling on others to do the same. The irony of course is that Paddy Power’s sister company Betfair were the first gambling company to sponsor a Premier League team (Fulham 2002-03).

Talking about gambling sponsorship in the UK, the Premier League’s acting CEO, Richard Masters, said in a recent BBC interview:

“I don’t think we’re at a position yet where we’re concerned we have to intervene and nor does the government. Betting is part of what brings people into football, it’s only a small part of it but it is part of the game.”

Research commissioned by GambleAware found that problem gamblers were six times more likely to have suicidal thoughts or try to take their own life, which begs the question – just how much worse does the situation have to get?

In 2018, the Premier League and Coca-Cola signed a three-and-a-half-year sponsorship deal, starting in January 2019 – another partnership between Football and Coca-Cola. The Coca-Cola Company has a long history of providing financial support to football at all levels, from grassroots to the world stage, in the UK and indeed around the world.

Coca-Cola is now working with the Premier League to engage fans up and down the country – last year they organised a Premier League Trophy Tour and recently refreshed its launch video which has been described as a “love letter” to fans.

With over a third (34.2%) of children entering secondary school carrying excess weight and almost a quarter (23.3%) of children aged five suffering from dental decay, the Premier League’s partnership with Coca-Cola is at best ill-considered and at worst potentially irresponsible.

Coca-Cola would argue they have placed greater emphasis on its sugar-free Coke Zero product during their marketing activities so far. However, the acid in Coke Zero can erode the enamel on the surface of our teeth. This is particularly hazardous for younger children, as their enamel is softer than that of an adult, making them more susceptible to harm.

The timing of this partnership arrangement is made even more perplexing given the public’s growing concern over single-use plastics and Premier League’s pre-existing relationship with Sky Ocean Rescue. The Premier League’s continuing association with Coca-Cola makes them complicit in the three million tonnes of plastic packaging that Coca-Cola produces every year and renders their attempt to encourage children to cut back on plastics questionable.

At the start of the 2017-18 season, the Premier League and Cadbury began a three-year partnership, becoming the league’s official snack partner claiming they wanted to “stay relevant” with future generations.

Interestingly, the announcement mentioned continuation of an existing Cadbury programme – Health for Life – that would “make a real difference to the lifestyles of 60,000 school children” through their partnership with Premier League. Not a word has been said on the matter since. National Obesity Forum spokesman, Tam Fry, told the BBC at the time:

“If the sponsorship meant that a host of kids would be encouraged to exercise and kick footballs to kingdom come, but didn’t come near a bar of chocolate, the forum might regard it as money well spent. But since the Premier League is rich enough to do this on its own anyway, and Cadbury could be looking at a downturn in the confectionery market, we regard this as little more than a marketing ploy.”

Cadbury have a track record in this area – they were heavily criticised in the early 2000s for their Get Active! campaign which encouraged children to eat chocolate to collect vouchers that could be redeemed for sports equipment for schools.

Shifting the debate from over-consumption of calorie-dense foods as the key driver of obesity toward physical activity is a standard industry tactic – one the Premier League would be better not being party to.

At the end of the 2018-19 season, Carling was unceremoniously dumped as one of Premier League’s official partners in favour of the more internationally recognised Budweiser, just as the FA had done so just 18 months earlier.

Similar to Coca-Cola, Budweiser has a long history of involvement in football and has featured as a key sponsor in the men’s FIFA World Cup in eight out of the last ten tournaments since 1982.

But one of the most disappointing aspects of this launch was Liverpool goalkeeper Alisson Becker appearing in promotional material for the new “Be a King” campaign. The Brazilian number one recently became a World Health Organisation (WHO) Goodwill Ambassador for Global Health in May 2019.

We’re not sure of the details behind last season’s golden glove winner’s (sponsored by Cadbury) appearance in the campaign, but it perhaps highlights the complexities of commercial rights holders and partnerships even when a star player has more altruistic tendencies.

The fact that one of the world’s best goalkeepers can feature in promotional material for an alcohol brand is also concerning when you consider the impact of alcohol marketing on children. In the UK, the proportion of children drinking alcohol remains well above the European average and evidence shows that exposure to alcohol marketing encourages children to drink at an earlier age and in greater quantities than they otherwise would.

Unfortunately, money talks when considering commercial partnerships. In the wake of overwhelming evidence of the harms caused by products promoted through sponsorship deals, the Premier League should aim to develop a more considered approach to its selection of partners aligned to its key principles, with a view to protecting fans, particularly children and young people, from harm.

The tragedy is of course that the charitable arms of Premier League clubs are doing some tremendous work to tackle public health challenges, using the power of football to encourage children to cut back on high-sugar drinks, to help fans to lose weight and to support the mental health of fans who over-consume alcohol or have issues with gambling.

Fans deserve more than the false promise of “getting closer to the action”.