Respect Your Health: No Tobacco at EURO 2016

Posted at 14:14h in News by healthystadia

Healthy Stadia is pleased to share further details on the ‘tobacco-free’ policy which will operate at the European Football Championships to be played in France from 10 June to 10 July.

As part of UEFA’s Respect Your Health: No Tobacco programme, the ten French stadia hosting EURO 2016 matches will operate a tobacco-free policy – one step further than at any of UEFA’s previous tournaments. Healthy Stadia has worked directly with UEFA and EURO 2016 SAS on development of this policy and how it will be implemented at all host venues over the course of the month long tournament, in particular use of 110 specially trained ‘Respect Your Health’ volunteers.

All volunteers involved in the Respect Your Health project have received “No Tobacco” training through a purpose-built e-learning website, an App, and situational group sessions at host venues – the content of which has been developed by Healthy Stadia. The training has educated tournament personnel on the health and safety benefits of adopting a tobacco-free environment, how the policy will operate at host venues, and intervention procedures for non-compliance, in particular use of a yellow and red card warning system. The training has also been provided to security managers and stewards who will help to enforce the tobacco-free policy.

To help keep track on the number of yellow and red cards used by volunteers, Healthy Stadia has developed a monitoring diary for use at each match to ascertain what cards have been issued and where in the stadium. Staff from Healthy Stadia will work as No Tobacco monitors at high priority matches over the first round of the tournament, assisting volunteers and stewards with implementation of the policy. Volunteers, stewards and Healthy Stadia staff will pay particular attention to hot-spots of non-compliance which include: turnstile entrances, standard seating areas, inside standard and disabled toilets, internal and external catering areas, and within stadium walkways and staircases. For a detailed explanation of the policy and how it will be implemented at the tournament please click: Respect Your Health: No Tobacco

Tobacco use is the largest preventable cause of premature death and chronic disease around the globe, and causes over 700,000 deaths in Europe every year. The primary reason why smoking will not be allowed during the UEFA European Football Championship is to protect fans and staff from the dangers of “second-hand smoke” which causes up to 80,000 deaths in Europe alone each year.

“The policy that Healthy Stadia will help to implement at UEFA EURO 2016 is one of the most progressive of its kind used at a sports tournament, and we hope this new benchmark is adopted by other competitions, both inside and outside of football,” commented Matthew Philpott, Director of the European Healthy Stadia Network.

Respect Your Health is one of the eight social responsibility and sustainability priorities defined for UEFA EURO 2016, all of which featured in the tournament’s one-year to go report. More information on the eight priorities and the report is available here. 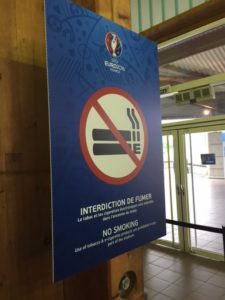 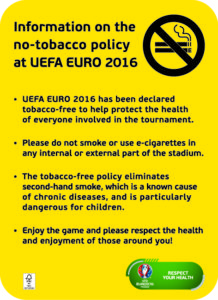