Sports Stadia and active travel: if you build it will they cycle? 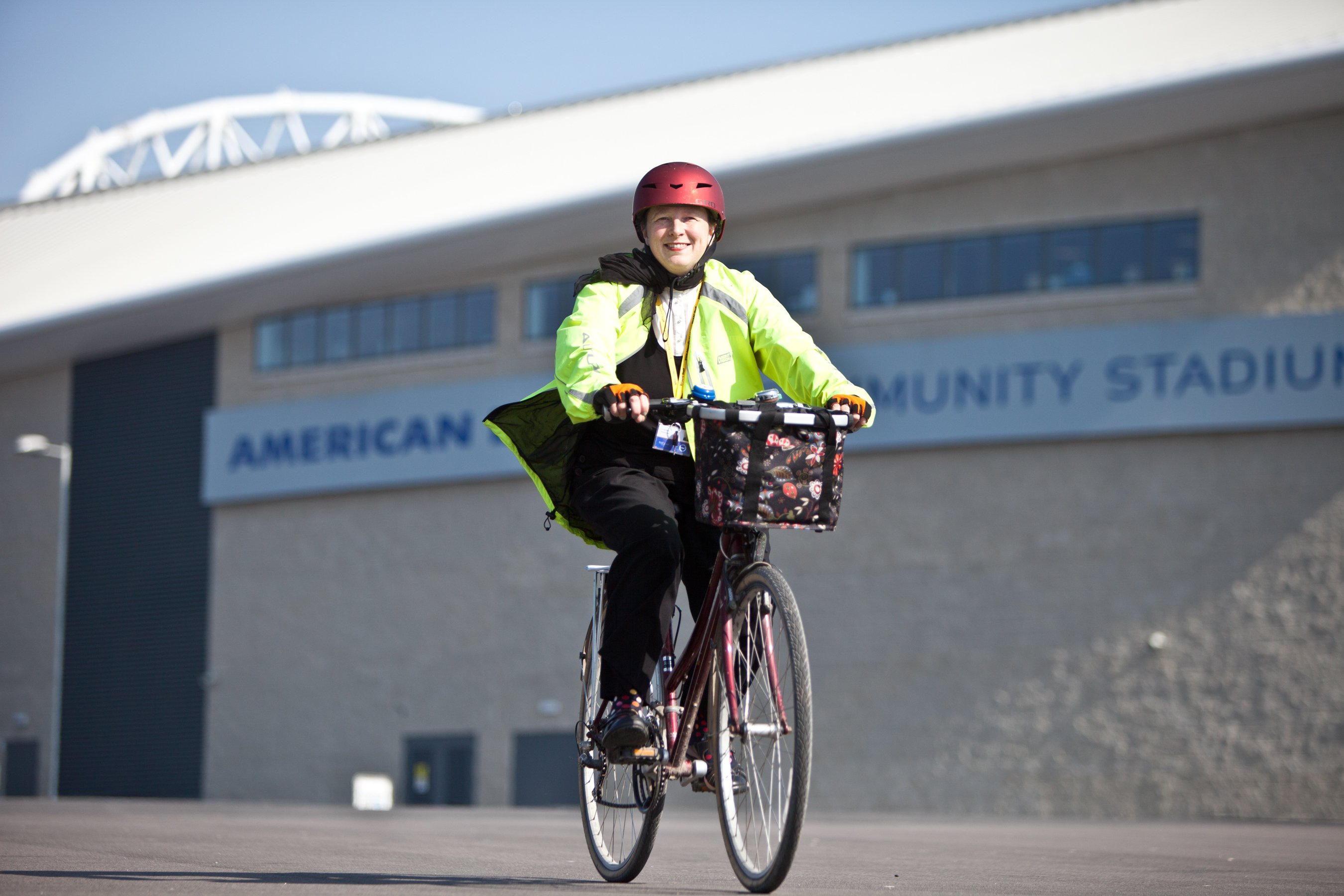 30 Mar Sports Stadia and active travel: if you build it will they cycle?

Posted at 09:13h in News by healthystadia

For several decades planning and transport practices in many European countries and cities have focused on the car at the expense of investment for pedestrians and cyclists. But enthusiasm is growing for planning urban areas with public health and environmental issues in mind as well as providing safe and inexpensive means of transportation for the general public — and sports stadia are no exception.

Its mid-winter. Two of the biggest teams in the league are facing off. The result could play a huge role in the championship. Thousands of fans are all eager to take their seat. The atmosphere is electric. Or at least that’s what the presenter on the local radio is saying. You’re stuck in your car struggling to find a parking space.

Travelling to the stadium is a key part of the match day experience and whilst driving to a match may be the easy choice for many supporters, congestion often causes a number of issues for residents (noise and air pollution) and stadium operations (traffic management).

Beyond the practicalities of matchday travel, large amounts of traffic also create a number of problems in terms of public health. Cultures built around private vehicular transport are generally less active and far more sedentary and subsequently have higher instances of a range of non-communicable diseases including, but not limited to, overweight and obesity, cardiovascular disease, type 2 diabetes and cancer.

But burning fewer calories is just part of the problem. Emissions from private cars, including greenhouse gases, are a major contributor to global climate change and also pollute inner city areas. Urban areas with higher concentrations of toxic particulates are associated with higher incidences of asthma in children and although a causal relationship has not yet been established between traffic density and cardio-pulmonary diseases and lung cancer in adults, research suggests it can at least can exacerbate a range of pre-existing issues.

But is there another way?

Walking and cycling hold great potential as inexpensive and accessible ways in which fans and members of stadia workforces can reduce their risk from chronic diseases, especially when walking or cycling becomes routine.

However, the limitations of placing emphasis on individuals to change their behaviour in light of these problems has generated renewed interest across Europe for community-level solutions promoting active travel as a viable alternative to private vehicular transport.

Professional sports clubs ranging from the UK to Poland have developed a range of policies and practices encouraging fans, staff and volunteers to choose walking, cycling and multi-modal travel (with an implicit ‘active’ component) to and from their stadia both on matchdays and non-matchdays.

The European Healthy Stadia Network has been fortunate enough to work alongside many of these pioneering clubs, collecting examples of best practice and developing Active Travel Guidance based on shared learning from these clubs and specialist European NGOs including Sustrans (UK) and European Cyclists Federation (Belgium).

In anticipation of moving to a new, 20,000 seater, out of town stadium in July 2013, KAA Gent and their Football in the Community department put into effect a communications and infrastructure programme focusing on sustainable and active travel.

Following an extensive sensitisation campaign and the installation of hundreds of bicycle stalls, in the region of 20% of KAA Gent supporters now regularly travel by bicycle to matches resulting in an almost congestion-free football stadium.

Similarly, Stadion Energa (Gdansk, Poland) promotes active travel and also promotes physical activity within its footprint (including… rollerblading) as a key component of their comprehensive CSR strategy which is aligned to the city’s sport and social development strategy. By acting as a responsible member of civil society, Stadion Energa has substantially increased its standing within their local community and is also involved in primary school cycling projects.

Some policies or interventions can indirectly promote active by discouraging the use of private vehicles through road and parking pricing or contributing to the improvement of public transport. Brighton & Hove Albion F.C. is one example of a club working successfully with local authorities to reverse normal travel patterns by deterring fans from parking in the surrounding areas, providing bicycle locking facilities and free public transport to the stadium from as part of a matchday combi-ticket. More than half (~54%) of all matchday attendees at the Amex include a physically active component in their journey.

The development of an active culture where walking and cycling short distances is the de facto option can play a major role in developing physically active citizens all over Europe. However, health promotion strategies are only part of the solution. Walking and cycling rates are much higher in cities and countries where infrastructure investment prioritises such behaviours suggesting that — if you build it, they will indeed cycle.

Active Travel at sport stadia will be addressed at the forthcoming European Healthy Stadia Conference in April 2017. To join the conversation head to #HSConf2017 on Twitter.

Beyond pies and chips: catering for health at sports stadia
Extra Time: Reflections on the European Healthy Stadia Conference 2017