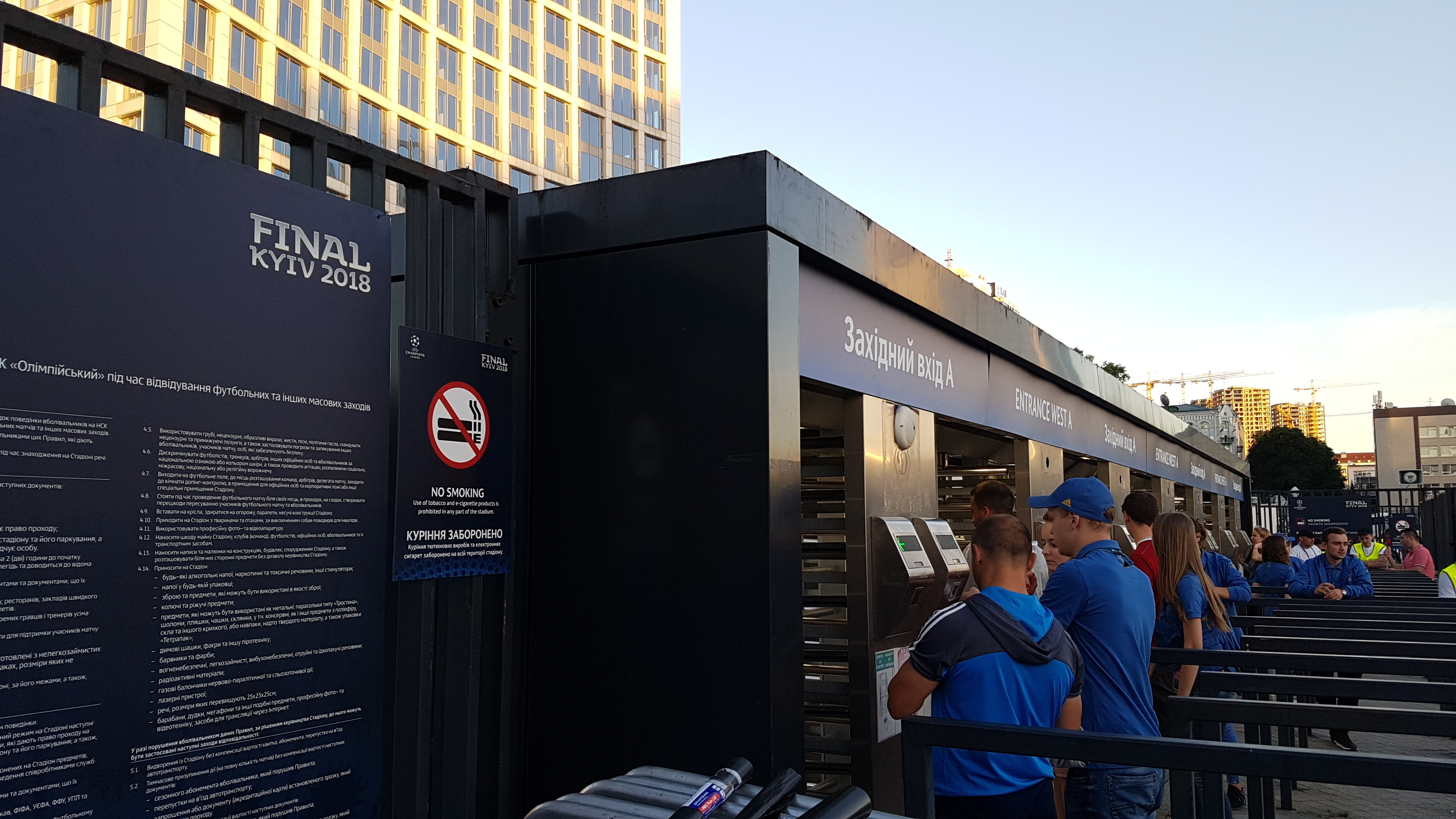 Posted at 10:00h in News by Michael Viggars

Last month, Parc Olympique Lyonnais and the Olimpiyskiy National Sports Complex hosted the UEFA Europa League and UEFA Champions League Final respectively. Both implemented Tobacco Control policies, protecting the health of fans and staff inside the grounds from the dangers of second-hand smoke.

Second-hand smoke is tobacco smoke that is inhaled involuntarily by those who are in close proximity to smokers. In Europe second-hand smoke contributes to the death of 79,000 non-smokers and about a quarter of these are children. 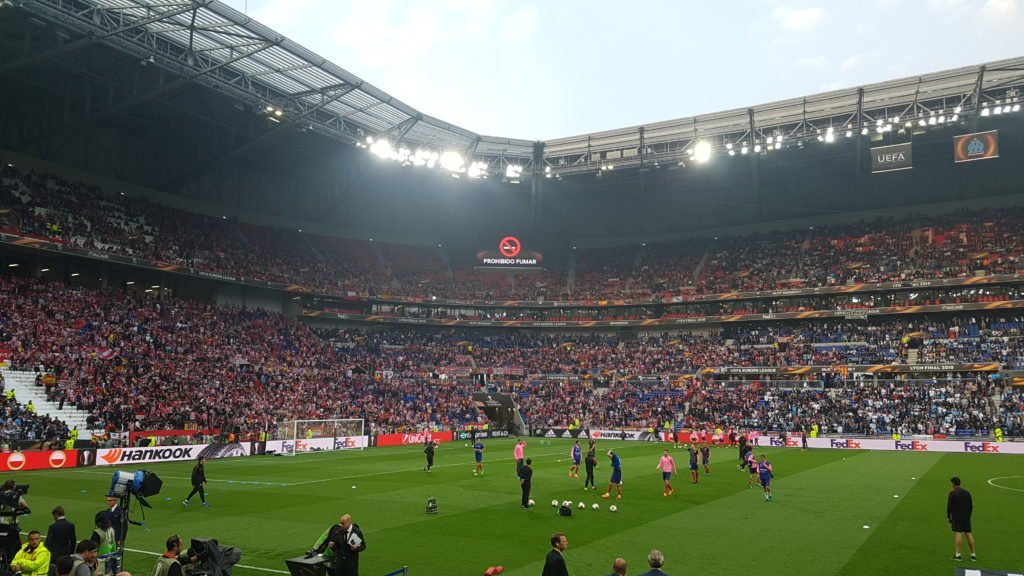 Above: Atlético Madrid players warm-up for their UEFA Europa League Final against Marseille, whilst fans are informed of the No Smoking policy.

One key difference between the policy that operated in 2016 and 2018 was the use of designated smoking areas (DSAs). A large, open-air concourse sits directly outside of the main stadium structure – enough space to operate DSAs without fear of second-hand smoke accumulating.

At half-time, fans wishing to smoke were instructed by big screen and public address announcements in English, French and Spanish to access a DSA external to the stadium. Stewards and security were supported by signage, which helped to direct fans outside. Stewards were on hand to give fans tokens which they had to present alongside their match ticket in order to re-enter the stadium. 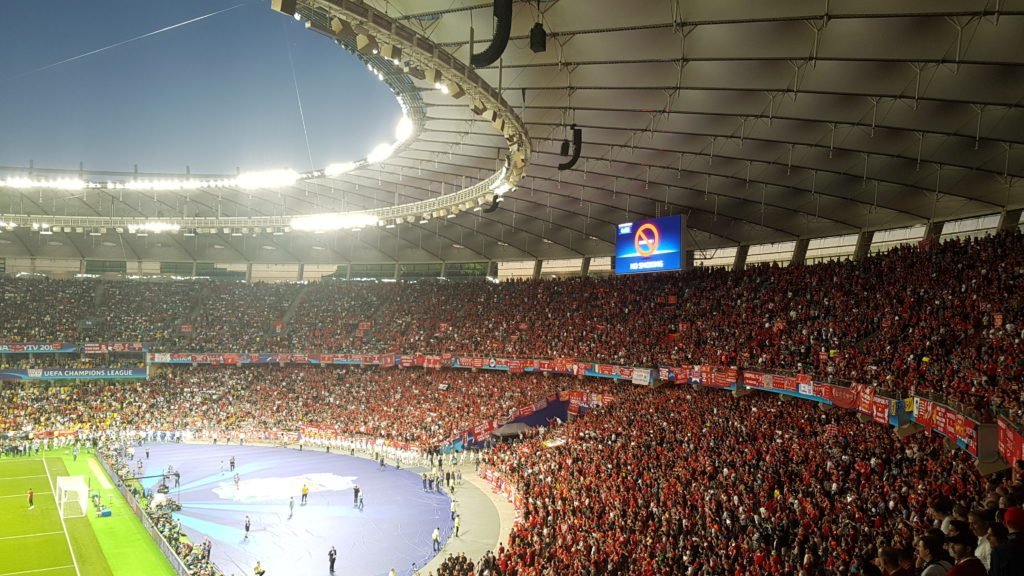 Above: Big screen and public address announcement inform fans of the No Smoking policy in operation at this year’s UEFA Champions League Final.

The 70,000 seater stadium in Kiev also operated a Tobacco Free Stadia Policy, with prominent signage on entry to the stadium complex and appearing in hotspot areas including kiosks, toilets and

Stewards and security were positioned effectively and were proactive in identifying and encouraging the few supporters who did use tobacco or e-cigarette products inside the stadium to leave the main stadium structure. In seated areas, the policy was observed well by both Liverpool and Real Madrid supporters.

For the past five years Healthy Stadia has played an integral role in developing and implementing No Smoking policies at UEFA’s signature events. By undertaking stadium inspections, and interviewing key members of stadium operations, Healthy Stadia puts together a set of recommendations to either improve upon or enhance existing Tobacco Free Stadia Policies. If the host country has national legislation prohibiting smoking in semi-enclosed spaces, this is also discussed in detail with stadium operations.

Placement of No Smoking / No E-cigarette signage is a vital component of any Tobacco Free Stadia Policy, but ‘hotspot’ areas such as toilets and the back of concourses where smokers are likely to congregate need to be identified. Digital media in the concourses such as television screens can also display the policy.

Big screens in the stadium bowl in conjunction with public address announcement are also one of the best ways to communicate the No Smoking policy to large numbers of supporters.

Healthy Stadia also develops a short training module for stewards and security staff briefing them on the No Smoking policy and how it will operate. Effective deployment of stewards, particularly at half-time, greatly enhances any Tobacco-Free Stadium policy.

To learn more about how your stadium can introduce a No Smoking policy click here, or email us at: info@healthystadia.eu