Posted at 12:55h in News by healthystadia

The pilot project, developed in partnership with European Healthy Stadia Network, Heart of Mersey and Pfizer UK Limited, will involve a number of elements to empower those who want to give up smoking, with fans encouraged to join the Smokefree Squad. The campaign was launched at LCCC’s CB40 game on Tuesday 5th June (see below) and will feature at SHRFC’s league game against Bradford Bulls on Friday 8th June. The project will run until September 2012.

On match days, smokers will benefit from advice from stewards who have been specially trained to help those ready to kick the habit. Local NHS Stop Smoking Services will also be on-hand at certain home games throughout the season to ensure smokers are aware of all the options available to help support them in their attempt to quit smoking.

Matthew Philpott, Director of the European Healthy Stadia Network, said: “While the UK’s enclosed stadia have been subject to smokefree legislation since 2007, there are significant opportunities to engage fans on match day who might be interested in reducing or quitting smoking. Sports stadia offer an ideal setting to deliver advice through brief interventions and we hope to demonstrate the scale of the opportunity through this pilot project. We know that smokers who seek advice from healthcare professionals are four times more likely to successfully quit than if they attempt to do it alone and we want to make this as easy as possible for the fans of both clubs involved in the scheme.”

A range of educational materials carrying the Smokefree Squad logo have been developed and will be available around both sports stadia, including fixtures booklets and player statistic cards. The launch of the project will be communicated to fans at the grounds through a number of channels including campaign posters, inclusion in match day programmes, and pre-match activities involving the club mascots.

Throughout the campaign, the partnering NHS Stop Smoking Services will actively recognise successful quitters and help highlight their accomplishments through updates on the club websites, articles in the club publications and through match day activities. The project will also see community coaches and relevant stadium staff trained to act as stop smoking champions within community projects.

Gordon Pennington, Director of Saints Foundation, the independent charitable trust which works in partnership with St Helens RLFC, said: “This project will enable us to create an environment conducive being smoke free and can hopefully make a real difference in helping smokers in the local community to quit.”

Jim Cumbes, Chief Executive of LCCC, said: “Through Smokefree Squad we aim to ensure that smokers who are motivated to quit are given the right support to help them succeed. This project gives us a unique opportunity to positively influence the lives of our members, fans and employees.”

It costs the NHS approximately £2.7 billion a year to treat the diseases caused by smoking1 and around half of regular smokers will eventually be killed by their addiction2. In the North West the number of smokers is above the national average, with 22% of adults smoking compared to 20% across England3.

Research commissioned by project partners Pfizer UK Ltd., reveals that the average smoker admits to having unsuccessfully attempted to quit three times before4, with 18 per cent having tried five times or more5a. However, just 11 per cent have taken time before starting to quit to consider their options for support and what would work best for them5b.

As Langtree Park, home of SHRFC, is composed of ‘closed’ stands, smoking is entirely prohibited within the stadium and at entrances. At Old Trafford, home of LCCC, smoking is banned within the enclosed sections of the ground, but is permitted within designated open air sections that are not within sight of the playing area. 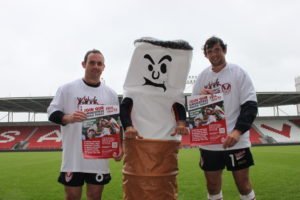 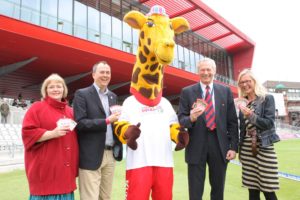